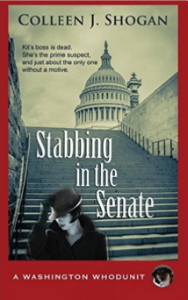 Thrillers set on Capitol Hill have a long history – the Mystery Reader’s Walking Guide: Washington D.C. lists some 100 books set at least partially on the Hill. Some are well-known, such as Margaret Truman’s Murder on Capitol Hill, others like Carolyn Banks’s The Girls on the Row, are less so.

Colleen Shogan’s Stabbing in the Senate follows along Truman’s lines more than Banks’s. She tells the story of Kit Marshall, a young, female Senate staffer who comes in to work one morning to find her boss stabbed to death with a model helicopter – much like Truman’s murder victim, who also ended up stabbed, though in his case with an ice pick.

Marshall finds herself the subject of unwanted attention from the D.C. police officer assigned to solve the case. As far as he is concerned, she is the most likely perpetrator, and though he does not go as far as to arrest her, it is clear that he would be perfectly happy doing so. With her freedom thus looking uncertain, and nobody likely to come to her rescue, she decides to investigate on her own.

In contrast to Truman, however, whose protagonist goes no further afield than the Senate dining room, Shogan’s makes several forays into the surrounding neighborhood, stopping by the 201 Bar at one juncture, then later meeting a source at the Capital Grille. Strategy sessions in the Dirksen Cafeteria, a tense visit to a Representative’s office, and a memorial service in McLean round out the scenes the story is set in.

Shogan does a good job of describing the work of a staffer – unsurprising, since she herself was one in a former life. Also believable is Kit Marshall’s confusion in being thrust into the role of suspect. In contrast to Hitchcock’s innocents, who seem to know exactly how to deal with being falsely accused, Marshall stumbles around for quite a while before beginning to set about clearing her name.

In doing so, she has to deal with a suspicious police officer, a boyfriend who is worried about his own reputation, and a friend who will do whatever it takes – even flirting across the political aisle – to get the information that will clear Marshall.

Stabbing in the Senate is a quick read, perfect for those commutes on the Red Line, and the back cover indicates that it is the first of a series of “Washington Whodunits.” Maybe the next one will move further into Capitol Hill? Mayhem at the Market? Bodies in the Barracks? Loitering in Lincoln Park?

The possibilities are endless.

Got any other Capitol Hill-related books for us to review? Contact us at thehillishome [at] gmail [dot] com!