From Warm-Up Game to Traveling Play: Winners and Losers at Woolly Mammoth 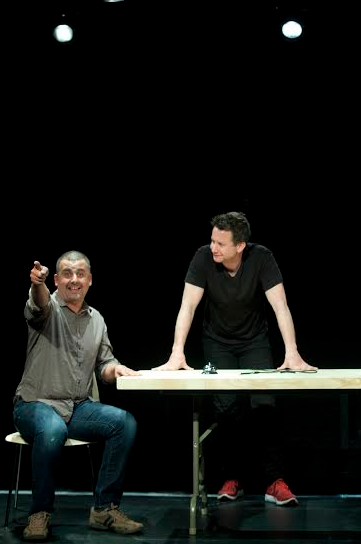 Winners and Losers at Woolly Mammoth Theatre Company is a “frisky theatrical symposium” (New York Times) from Canadian theatre artists Marcus Youssef and James Long that blurs the line between real life and fiction, the personal and the political, admiration and resentment. We sat down with Marcus and Jamie to discuss the framework of the play, its origins, and its significance to Washington D.C.

How did you come up with the idea and game format for “Winners and Losers?”

J: Winners and Losers started as a warm-up game we played in advance of trying to write another thing. We decided to collaborate on a project together for a number of reasons, not least of which was a growing curiosity in each other’s respective, somewhat contrasting practices as theatre makers. Before sitting down to write this proper ‘play’ about a pair of competing Russian novelists we would list a bunch of people, places and things on the wall, turn on the recorder and debate whether they were winners or losers. It was a both warm-up game and a procrastination tool and it turned out we were pretty good at it.

After a few days we started exploring more personal material by debating who was the better cook, husband, partier, driver, actor, lover etc. For both formats we put on Russian accents — the Russian thing kept coming up mostly because we were working at a place called the Russian Hall. The accent, which served a bit like a clown nose, provided a freedom to say remarkably cruel things about both the topics and each other. A cruelty we only recognized when the transcripts came back and we re-read them without the accents. A cruelty, based in an eagerness to win that comes so easy, you might think it’s innate…. we still debate the innate thing.

What is the value or intrigue of assigning the title “winner” or “loser” to a person, object or idea?

J: I don’t think either of us spend much time in the realm of fantasy or high fiction with our work. For the most part both of us have worked inside the here and now exploring societal and political topics and questions that present themselves to us and the people around us.

The intrigue is in the mirror or the acknowledgement of the pervasiveness of this, potentially bankrupt, paradigm of one over the other. The weighing of “winner” or “loser” is a constant in our society from politics, to sports, to how you might encounter random people in the street. Us against them, this against that, me against you. Is a Mac better than a PC? Chevy or Ford? New York or LA? Canada or the US?

Is there any value in it? Depends on who is playing, who is listening and who is encouraging the game. Competition when healthy and helpful is good for all of us — you might even call it collaboration. When competition is unhealthy, this usually means someone is playing at a disadvantage or another is playing unfairly or someone or something external is pitting people against each other. I can’t get Jeff Bezos out of my head for some reason and the dog-eat-dog corporate culture I’ve read he pushes at Amazon. It might be valuable for Amazon and Bezos but I can’t see it being good for the staff to be pitted against each other.

Marcus and I are pretty fairly matched with Winners and Losers. We are equally invested because we want to play the best we can, make the best show possible and explore this question of competition as thoroughly as possible. There are residual effects for sure — it takes quite a while to shake the ‘game’ following an extended run — but we come at it together and with a common goal.

How does the show change for you from night to night? From city to city?

M: Place and context changes this show. I mean, I suppose it changes any show, but we have felt it more directly in this one than any other we have made. This is partly because a significant percentage of Winners and Losers is new every night, and part of the show’s design includes debating subjects and events that are specific to the community we are performing in. It’s also because each venue brings its own particular social and political context to the questions of competition, of income inequality and the winning-is-the-only thing ethos that defines a good chunk of what we collectively agree is necessary to grow our economies and make our societies better. Iceland was fascinating — the debate about capitalism that’s at the show’s center seemed hugely resonant. Iceland was global capital’s canary in the coalmine for the Great Recession (and they put a few bankers in jail!). In Brighton, UK, we sensed less urgency in the response. We think that may have had to do with the way people’s class is almost immediately obvious the minute they open their mouths — because of their accents. That’s very different than Canada, where we’re from.

Has the overall meaning and resonance of the piece changed for you over time, particularly as you bring it to Washington, DC, a year before a presidential election?

M: Doing the show in DC is a dream. You guys live in the center. Of an empire. Holy winner. And we feel like winners just for being invited –that’s the Canadian way. But is your empire in decline? Seems like it. Then who’s the bigger loser? You guys, for an electoral system entirely about raising unimaginable sums of cash over an absurd length of time? Or the rest of us, for paying far closer attention to your endless electoral sideshow than than what’s actually going on in our own countries?

Are there off limits topics — things that you would never put up for debate?

M and J: Partners and children. They never asked to be part of this crazy career path we’ve chosen and definitely never asked to be put on display in a show. They pop up inside the work, its kind of inevitable considering the territory we tread, but we never choose them specifically as a specific topic of debate.

Some of the big questions we are chewing on right now are what the long term effects the show may have on us as performers, as friends, and as human beings. The show really bangs around in your head each night after it’s done. Especially if you feel you’ve “lost”. In a more conventional piece, having a bad night as a performer might leave you temporarily feeling like a bad actor. That’s a standard neuroses for actor types and one you learn to brush off pretty quick. A bad night in Winners and Losers leaves you feeling like a bad person — not as easy to brush off.

Occasionally that means more detailed check-in’s prior to show but just as often it means retreating to beef up your arsenal for the next night. If the goal is to win — you win. So what are the long-term effects of this? When, or how often, will someone go too far in the show? What might seem like a quick jab to one person could be a massive upper cut to the other. Is someone being too sensitive? The other an asshole? Then you have daily moods to deal with, the fact we are often missing our families, the ongoing trials of living on the road. When you add to this the fact that the characters you see on stage are so closely linked to Marcus and Jamie in real life, it can sometimes add up to a bit of a mind-fuck. Some of our closest friends/colleagues have expressed serious concern about the show’s impact — not on our audiences, but on us. We think we’ll be ok.

Get tickets to Winners and Losers, October 27 through November 22 at Woolly!