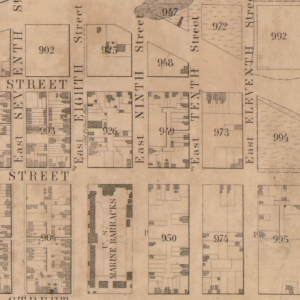 I have previously written of the changes made to the names of streets on Capitol Hill, in particular how both B Streets were renamed Constitution and Independence Avenue.  Today, I will look at a different sort of street name change.

While the most important street on Capitol Hill in its early days was, without doubt, Pennsylvania Avenue–to the point where people simply referred to it as ‘the avenue,’ two other streets held particular significance in this nascent neighborhood.

The first of these was 8th Street SE, particularly the stretch from Pennsylvania Avenue down to the Navy Yard. Not only did it pass by the Marine Barracks, but it was here that the majority of shops serving those who lived near and worked in the Navy Yard were located. Its proximity to the Barracks also gave it a name.

As James Croggon, longtime D.C. reporter and later chronicler of its history, stated at a meeting of the Oldest Inhabitants on May 3, 1905: “The marine barracks buildings were so well known as ‘the garrison’ that the streets leading from the avenue to the main entrance of the yard (8th street) was known far and wide as ‘Garrison street.’”

Two classified ads showing the use of these names. The Brush grocery is the same that I wrote about last week (LoC)

This name was, however, not used on official documents. No maps of the time refer to it this way. However, it was clear that the locals most certainly used it, and many of the classified advertisements published in the papers of the time refer to 8th by this name. Occasionally, even the papers themselves would use this moniker. An 1863 piece in the Daily National Republican with the title “Robberies” explains “The same party also a few moments before went into Mr. Wolfheimer’s store on Garrison Street, between I and K, and stole a hat valued at $2.50.”

By the time Croggon stood before the Oldest Inhabitants, the usage had died out. Around the same time, another street with the name Garrison was added in NW D.C., ensuring that its use in SE would be–at best–confusing. The new street was most probably named after William Lloyd Garrison, and thus had nothing to do with any military installation.

In the same talk, Croggon mentioned another street: “Eleventh or Bridge street was quite a business mart, as the stores there caught the country trade from Prince George county, and a mill at the water’s edge did quite a business. The late George A. Bohrer was located here for some years.”

This usage seems to have been much less widely used than that of Garrison Street. Furthermore, there was a Bridge Street in Georgetown, which made it somewhat confusing. Again, by the turn of the 20th century, nobody was calling the street anything but 11th, even though Georgetown’s street had been renamed M Street in 1895.

With the opening of the restaurant named Garrison on 8th, there is at least a small nod again to this piece of forgotten historic lore.

One response to “Lost Capitol Hill: Bridge and Garrison Streets”