Lost Capitol Hill: Aftermath From the Battle of Fort Stevens at Lincoln Hospital

I will return to these two important moments in history many times in the next months and year, but first I want to start with a Capitol Hill connection to the battle of Fort Stevens. In fact, a hospital located at Capitol Hill’s Lincoln Park played an important role in the battle.

On July 11, 1864, Confederate General Jubal Early and his men reached the outskirts of Washington D.C., just north of Fort Stevens. The fort, which represented the last line of defense between Confederates and the Capitol, was lightly defended and held by a company of soldiers from Oberlin College. General Early was resting his troops in Silver Spring after marching continuously for weeks. They stopped to break at Postmaster Montgomery Blair’s wine cellar.

Fighting at Fort Stevens erupted on July 12th, and by the time Early and his troops withdrew, there were almost 1,000 men dead. Fortunately, Washington was full of hospitals, some just a few miles south of the battlefield. One of those was Lincoln Hospital, a mile east of the Capitol, where Lincoln Park is located today.

The Confederate hospital was quickly thrown together in the Sligo Post Office (the corner of Colesville Road and Georgia Avenue in downtown Silver Spring). The post office was cleared, but the 30-badly injured Confederate soldiers were sent south to Lincoln Hospital, where they joined Union soldiers who were already being treated.

Two of the Confederate soldiers — both privates from Georgia — were admitted on July 14th. Neither survived their time at Lincoln, but both ended up in medical books. William L. Brown died first, on July 15th. The autopsy showed that a bullet struck his stomach and lodged in his spine. Meanwhile, William P. Bernard died on July 22nd (according to the muster rolls) or the 24th (according to the medical textbook). He died from an injury to the pancreas. Both cases were written, in hopes that future doctors could learn from their fates, and both men were buried in Arlington Cemetery. 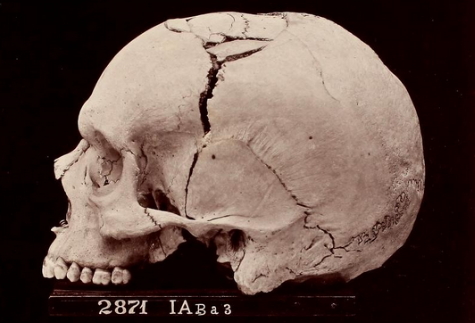 The skull of the unknown soldier who died of a shrapnel wound (Archive.org)

The most remarkable case, however, was from a Confederate solider who was found, “unconscious and unable to articulate,” until July 17th. At that point he was taken to Lincoln Hospital. The rebel had been hit in the head by shrapnel of a shell fired at Fort Stevens. Given that he was found some three miles north, it was believed to be from one of the eleven-inch guns that fired. Amazingly, the soldier survived five days in the open with no medical care; he survived for only two hours at Lincoln Hospital. During the autopsy, it was discovered that the top of his head caved in and his skull suffered from diastasis — a separation of bone due to the force of the impact.

The skull was considered a splendid learning tool, and was forwarded to the Army Medical Museum. Images of the skull were circulated in a collection used to help surgeons hone their skills.

Thus did Capitol Hill add its own footnote to the battle of Fort Stevens, and helped three Confederate soldiers to a certain kind of fame. Maybe one they would rather forgo.

Much more about Fort Stevens and Abraham Lincoln’s time there (plus 32 other legends and the surprising truth behind them) in my book Urban Legends & Historic Lore of Washington, D.C.