When we think of memorials and monuments today, structures of bronze and marble are what first spring to mind. Whether the figure on horseback such as the Grant statue in front of the Capitol or the simple obelisk that honors the memory of the father of our country and namesake of our city, monuments are eternal and unchanging. There was, however, a brief period when this was not the case.

For a while in the 19th Century as the public attitude towards monuments was changing from the heroic to the abstract, another form of memorial had a brief reign: That of the memorial tree.

One of the most famous of these was a tree planted in honor of Thaddeus Stevens. Stevens, a member of the House of Representatives from 1859 until his death in 1868, was one of the great leaders of that body through the Civil War. In spite of all that he did during the War to ensure that the enormous costs were paid for, no permanent memorial to this man remains in DC. For a while, however, a giant plane tree grew, first on the grounds of the Capitol, and then later in the square now known as Lincoln Park, in honor of him.

In 1898, William R. Smith, superintendent of the DC Botanic Garden held a speech before the Massachusetts Horticultural Society. In it, he spoke of the tree: “The first [plane tree] planted in the District, as far as I can learn, was the one that we now call Thaddeus Stevens memorial tree. At his suggestion, two stalwart contrabands planted it on the bank of the Tiber, in the Botanic Garden, the arching of which caused its removal to Lincoln Square, where it stands a gem, occupying the center, with its branches on the ground, shading its stem in a natural manner.” 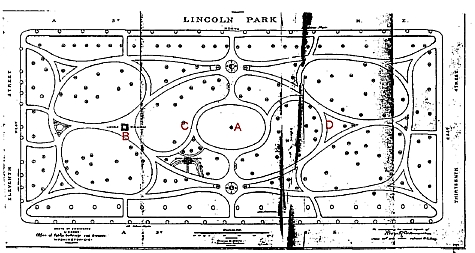 Numerous other trees on the Capitol grounds that were planted as memorials to other leaders of the 19th Century are mentioned in an 1891 Washington Post article. Francis P. Blair, Joseph Crittenden, John W. Forney, Edwin Forrest, and James Garfield were all thus honored. The last-named had the distinction of providing boughs that were placed on the assassinated President’s bier when it was carried from the White House.

Though the Stevens tree no longer stands in Lincoln Park, its influence lingers. Since it was planted directly in the center of the park, there was no way to place Thomas Ball’s emancipation statue at that place, and thus it was set a few feet to the west – and thus left room for the second statue of the park, the Mary McLeod Bethune memorial.

No newspaper article marked the death of the Stevens tree, and today its spot is the heavily used rectangle of grass (or, more usually, mud) that occupies the center of Lincoln Park.