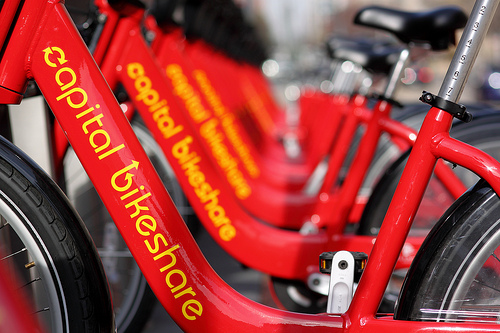 Today marks the one year anniversary of Capitol Bikeshare, the nation’s largest public bike sharing system (at least until those laggards up in New York finally catch up). Which means it’s been a bit under a year that residents of Lincoln Park have had to suffer the cruel indignity of having 15 bikes foisted upon them.

No longer do children run and play on what was once an idyllic bricked-over traffic island. No longer do Maryland drivers (and quite a few of you jackasses) blindly whip around the northeast corner of the Park. No longer can the neighbors of Lincoln Park enjoy the sleepy quiet of our urban oasis.

It’s gone, all gone, buried under the oppressive weight of a solar powered station and 15 docks. The station’s eye piercing ugliness has forever destroyed the aesthetics designed by L’Enfant himself. You might as well block out the sun with overhead streetcar wires. The horror, the mundane horror!

Seriously though, does anyone else remember back a year or so when we were actually debating this? When people showed up in droves at ANC meetings (well, by ANC meeting standards) for this issue? When blogs and listservs were clogged by this discussion? Hell, people even got in shoving matches and told each other to “fuck off”!

People, or a least the small but vocal subset that had objections, feared that speeding cars would hit users crossing the street to get to their bikes. Bikers, apparently notoriously filthy, would leave trash lying about. Children would be confused by the shiny red bikes and run out into traffic (but somehow not the actual playground equipment in the park?). Vandals would prey upon the bikes, slashing tires and other tomfoolery. Turning tractor trailers would lose the space needed to turn. Rebalancing vans would create havoc, blocking traffic and causing backed up cars to destroy residents quality of life with their incessant honking. Finally, somehow, Capitol Hill’s residential neighborhood was thought to be “not dense enough” to support a bike sharing program.

In light of that last objection, it’s particularly humorous to find that the main issue surrounding the Lincoln Park station is that it’s been too successful. Users often find that bikes are taken fairly early in the morning, or that the station is “dockblocked” in late afternoon. Rather than showing that Capitol Hill can’t support this system, it illustrates that the system is still too small for our neighborhood. Increasing capacity, in both bikes and docks, is critical for usability of the system and is, fortunately, on the way.

But what about the rest? Did any of it materialize?

According to DDOT Project Manager Chris Holben, aside from the issue surrounding the lack of bikes, the only specific complaint is from a neighbor on 13th St NE. 13th is a one way northbound street, and approaching the Park from the north can be difficult. People are riding the bike lane southbound, into oncoming traffic, both auto and bike. Mr. Holben acknowledges the issue of approaching from the north, but stresses that “even if there is a bike lane you have to ride the right way.”

So there we go folks, no complaints of trash, of vandalism, of noisy vans dropping off bikes. No children run over chasing after shiny bikes. No swarms of rats depressing property values.

Don’t we all feel a little silly now? Maybe we all want to take a deep breath the next time a “critical issue” comes up?

And for good measure, stop riding the wrong way down one way streets, folks!

23 responses to “Mr. Wells, Tear Down this Bike Station!”