As the nights get longer and colder, and as we get closer to Hallowe’en, it is time to dig out the ghost stories of the Hill. Fortunately, there seems to be an unending supply of them, and so today we look at a ghost that haunted the northeast Hill for many years.

Usually ghosts are seen by folks who are drunk or tired or otherwise not at their most believable. In this case, however, the ghost was seen by a DC patrolman – and not just once, but several times. The first time was in September of 1895, a few minutes after midnight. Patrolman Noah Sedgwick heard some commotion, and thinking it was his relief playing a prank, Sedgwick picked up a cobblestone to throw at him. It was then that the patrolman noticed that the thing making the noise was white – and headless. Sedgwick dropped the stone, and the ghost groaned, leaned against a fence – displacing a couple boards in the process – and disappeared.

This was not the last time that Sedgwick would see the ghost, but it was not until November that his encounters caught the eye of his superiors. On Sunday, November 24, 1895 at 2:20 AM, Sedgwick saw a man crouching by a treebox. When the man refused to heed the patrolman’s calls to stop, Sedgwick pulled out his revolver and fired it. Unsurprisingly, the ghost disappeared instantly, leaving only the smoke of Sedgwick’s revolver hanging around.

Needless to say, his higher-ups wanted to know more about the ghost, and in questioning other patrolmen, found out that at least two others had sighted the same spectre. This was all duly reported by the Washington Post on the Tuesday after the firing of the shots. The Post‘s story generated an impressive amount of interest, and stories of this ghost going back 20 years were uncovered. What no-one could say was who this ghost was, though it was posited that it was the last remaining earthly sign of a notorious body snatcher who had inhabited the area during his life. Others were certain it was Joseph Beam, who was hung for the murder of his step-daughter. And still others thought it was the step-daughter herself. 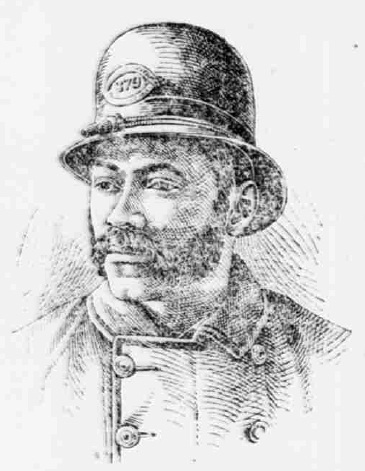 Patrolman Noah E. Sedgwick, taken from an article in the Washington Bee. (Library of Congress)

A Post reporter followed Sedgwick on his rounds a few days after the shooting incident, but other than a discussion of buying silver bullets to ensure that they would be effective against the ghost at its next sighting, nothing noteworthy happened.

There are no reports of silver bullets having actually been purchased or used, so there is every possibility that the ghost still haunts Patrolman Sedgwick’s bailiwick. If you’re out late at night between 12th Street NE and the Anacostia, between East Capitol and F Street NE, look out for a headless person out for some mischief. And don’t forget your silver bullets.

Robert Pohl and Tim Krepp will be giving ghost tours of the Hill throughout the month of October.  More information can be found and reservations made through WalkingShtick.com.