After posting last week’s column about changing the name of B Street SE, a commenter wondered how Georgia Avenue SE had become Potomac Avenue. Fortunately, others have already found the answer to that question, so I have been able to dig up a fairly coherent story about how it happened.

On the first correct map of DC, the famous 1818 map by Andrew Ellicott, there are 15 avenues that are named after states. The only state of those that had joined the Union before Washington became the Federal Capital in 1800 that is missing is Tennessee – and that may have simply been an oversight by the mapmaker. (The street named Tennessee Avenue now exists on the map, it is simply unnamed; the next oldest map on the Library of Congress’s website has it marked properly, making it fairly certain that it was just an oversight of Ellicott’s.)

The state of Georgia is represented by a street that extends from Reservation 13 (the current site of St. Coletta’s) through to the Navy Yard, then hops across a short stretch of the Anacostia river before continuing through SW DC all the way to the Potomac. It was a fitting monument to the fourth state to join the Union and located, appropriately enough for the southern-most state at the time, along the southern stretches of the city.

Unfortunately, this was not good enough for a Georgia Senator named Augustus Octavius Bacon, who was first elected to the Senate in 1894. He complained that it was a muddy mess, and hardly a credit to the “Empire State of the South” and, to be honest, pictures from the 1890’s bear out his complaints. However, changing the name of the street also required finding another street that could be renamed “Georgia Avenue.” 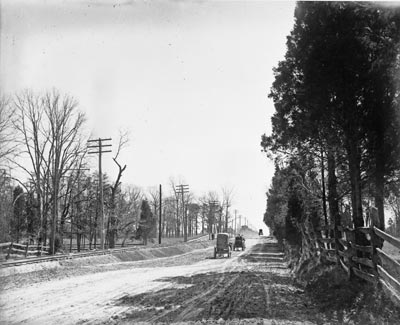 Bacon first tried to name North Capitol Street after his home state, but this met “with such strenuous objection [that] he consented to accept the suggestion of the Commissioners that the name be bestowed upon what is now known as Brightwood Avenue” [Washington Times, June 10, 1906] and so, in spite of Bacon’s long service and concomitant power in the Senate, this attempt to change the name failed.

Bacon was nothing if not persistent, and, two years later, he tried again. This time, the focus of his ambition became Brightwood Avenue, which was what the Seventh Street Turnpike (an extension of 7th street) had been renamed. Once again, there was an outcry by the affected citizens, and impassioned letters to the editor were written and printed. The most pointed argument against the change came from unnamed residents, who presumably lived on Georgia Avenue, who opined that “the fault lies with Congress largely, which has it in its power to make it an honor to the State whose name it bears.” [Washington Herald, May 1, 1908]

In spite of attempts to derail the conference between the House and the Senate on the District appropriations bill, it passed unchanged, and so, reported the Washington Herald on May 22, “Potomac avenue is now the name of the highway formerly known as Georgia avenue.”