If you’re anything like me, to you Providence Park is mainly important for its hosting of Soccer on the Hill for the younger crowd. Only a small plaque (part of which is currently stolen) indicates Providence Park’s history as the site of one of DC’s oldest hospitals.

In today’s column, I’ll look at the history of this illustrious place of healing.

At the start of the Civil War, the main hospital in the District of Columbia was the Washington Infirmary, which stood on what is now Judiciary Square. Due to the anticipated influx of war wounded, this hospital was taken over by the US Government, leaving DC without a hospital for use by private individuals.

Fortunately, the Sisters of Mercy (not the ’80s goth-rock band) opened a hospital for the city, with $6,000 secured from Congress by Drs. Toner and Young. In spite of its being founded as a civilian hospital, it was used mainly to treat soldiers throughout the Civil War, and only in 1866 was an announcement made that it was opened to the public.

The hospital continued to be funded by Congress, and the patients were half private and half indigent.

A report in the 1894 Journal of the AMA describes Providence Hospital’s methods:

The good Sisters in charge of the Providence Hospital can always be relied upon to help the poor sick outcasts whom no other institution wishes to provide for. A poor woman with a child suffering from diphtheria went the rounds of the hospitals a short time ago seeking admission, but failed until she was sent to a room in the workhouse hospital. The Commissioners, in the absence of a contagious disease hospital, are at last to provide for such cases. As all of the hospitals of the city have rules against the admission of such, the Commissioners appealed to the different institutions and urged the providing of wards for such cases. The Providence Hospital answered promptly and at once made the necessary arrangements to care for poor patients suffering with such diseases. The community will not soon forget this and many other humane acts of these good helpers of the sick.

It is hardly surprising that the hospital continued to grow, and in 1903, Congress appropriated money for the old wing of the hospital to harmonize it with the Spanish-influenced tower and east wing that had been added later. This work cost more than expected, and in 1904, another $130,000 was requested from Congress to finish off the work. 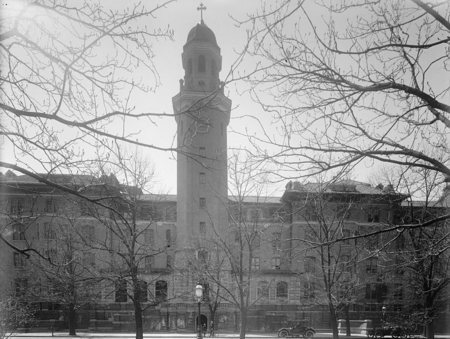 In spite of continued improvements of this nature, by 1964 the hospital had outgrown its grounds, and so the hospital moved to its current quarters of 12th Street, NE near the District border. The original buildings were ignominiously torn down, leaving only the open space we know today – as well as a small plaque commemorating this important piece of Capitol Hill history.