How the Schools of Capitol Hill Got Their Name: Ludlow-Taylor Elementary

Continuing our series of “How the Schools of Capitol Hill Got Their Name,” I’ll follow up on fellow tour guide and Hill dad Tim Krepp’s recent article with a discussion of my son’s school, Ludlow-Taylor Elementary School.  Zachary Taylor is a no-brainer– Old Rough and Ready, Mexican-American War hero and 12th President of the United States. Many people know of him only because he died barely a year after being elected in 1850, famously becoming ill from a bowl of milk and cherries eaten on Independence Day. Interestingly enough, it was then that Taylor became a bit of a Hill resident, and was interred at the Public Vaults at Congressional Cemetery until his body was moved back to Kentucky.

The question I had then was, who the heck was Ludlow? So a couple of weeks ago I took a couple of trips downtown to find out, to the DC Public Schools Archives which is located in the old M Street School/Sumner School at 17th and M, NW. This building has a rich history of it’s own. Historically, some of the teachers tie directly into our local and national civil rights movement and reach all the way back to the end of the Civil War and the abolition of slavery…but that’s a completely different subject.

However, it is for a more mundane reason that we have a reminder of him on Capitol Hill. It only occupies one small line in his bio, but that was enough that his name graced our school’s doors: “During 1886-88 was Engineer Commissioner of Washington, D.C.” After the controversial tenure of Boss Shepherd, Congress abolished the short lived territorial government of Washington, DC in favor of a three-member Board of Commissioners, which remained in charge of the District for over a century. As school’s were constructed in the nation’s capitol, the board named them after presidents of the United States. Once they ran out of these names, they turned to the names of city commissioners. William Ludlow only had the job for two years and even then he was only one of a set of three that simultaneously held that position, but he managed to get a school named after him. Thank goodness he went on to do some other interesting things.
Originally, the two schools were barely a block away from one another. William Ludlow Elementary School was built in 1904 and located on the corner of G and 6th NE and is now a baseball field. Zachary Taylor Elementary School was built in 1891 and was located on 7th street about 50 yards in from G Street NE. It is now a parking lot for the staff of the current school. Both schools were the standard 8 school rooms with a capacity of 288 pupils, much like the original Brent we saw last week. Our system of educational apartheid was in place when the two schools were constructed, but the neighborhood was largely white so both schools were built as whites-only schools. As the demographics changed so did the schools. Few records were kept regarding which schools were used for which races, and when they changed from one race to another. However we do have a staff member at Ludlow-Taylor who’s entire family went to William Ludlow ES while it was in existence and as far back as she can remember, it was a black school. Happily, Washington DC desegregated the school system on September 13, 1954, only 4 months after the Bolling v. Sharpe decision was handed down. In 1969 the new school, Ludlow-Taylor ES was built and both of the original buildings were razed. 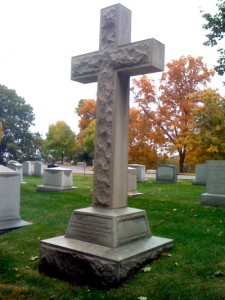 After finishing a recent tour of Arlington Cemetery I took a hike over to Section 3. Section 3 is one of the more prestigious sections of the cemetery, with quite a few well-known Americans and great stories: Walter Reed, Daniel Sickles, Vinnie Ream (Hoxie), and would-be President William Rosencrans to name a few. Among the headstones, stands the tall stone cross that marks the grave of Major General William Ludlow. Our school was built three years after his death in 1901. His exciting life and short connection to our city obviously made him an excellent candidate for the naming of a school, although few know of him now.

One response to “How the Schools of Capitol Hill Got Their Name: Ludlow-Taylor Elementary”