Dear THIH: Is That The National Anthem or Am I Going Nuts?

On Saturday December 24, most of us noticed it: Right at 8 a.m., someone played a loud recording of The Star Spangled Banner. Although new and long-time residents are all aware of Washington’s traditions and the protocols associated with the military bases and federal installations that surround us, this didn’t feel like an ordinary event.

What does DC do when things out of the ordinary happen? People take to Twitter. The first tweet came from reader Sarah Heffern, a few minutes after 8 a.m.:

Second weekend in a row: super-loud recording of the national anthem blaring through the neighborhood at 8am. Any idea why, @theHillisHome?

We asked Sarah’s question on Twitter and on Facebook and several plausible explanations came forth. Maybe the anthem is connected to inauguration preparations? Both the Marine Barracks at 8th and I Streets SE and the Washington Navy Yard appear to play a recording of the Star-Spangled Banner at 8 a.m., according to a few of our readers. Maybe the day’s acoustics were just different that day. These are a few of the comments on Facebook:

Scott Jensen: Yep – 5th and G SE. It’s from the Navy Yard. They play it every morning at 8 AM. One of the many reasons why I love living on the Hill.

Jon J.P. Brandt: The Marine Corps Barracks plays the Anthem EVERY morning at 8 am. That seems to correlate with your post. Perhaps it sounded louder than normal due to atmospherics.

Cait Unites: Loud and clear at 7th and A NE; I’ve lived here for years and have never heard it before in the morning, though sometimes I do hear strains of Taps in the evening.

After calling the Public Information Office at the Marine Barracks and not being able to reach an actual human, I reached out to Christine Mosser, Chesty XIV’s mom. Chesty is one of the most distinguished residents of the Barracks. (Read about him here!) Christine’s husband Jason is part of the Drum and Bugle Corps. Christine told me that what plays daily at the Barracks is Morning Colors. You can see a list of musical selections played by the Marine Band during Morning Colors here, and see that our national anthem is among the selections but not the top one. Christine added that she’s also heard the unusually loud recording, and she and Jason agreed with what neighbor Scott Jensen told us: the anthem comes from the Washington Navy Yard. We tried reaching out to the public information office at the Navy Yard to confirm. As with the Marine PIO, we had no luck reaching a human after calling multiple times.

Despite our collective love for patriotic displays, the majority of readers who weighed in on both media were more than a little flummoxed by being able to VERY LOUDLY hear a recording that seems to have played more than a mile away from our homes. Some of our readers reported having heard it as far as F and H Streets NE to the north; others heard it as far southeast as 14 and K SE. Some neighbors heard it for the first time on December 17 but thought they were imagining things –hence our cheeky title to this post. And then, to add to this little mystery, we got this Tweet a couple hours later:

@theHillisHome have you been tweeting about something similar happening on the hill?? https://t.co/8ivQ4uvuxc 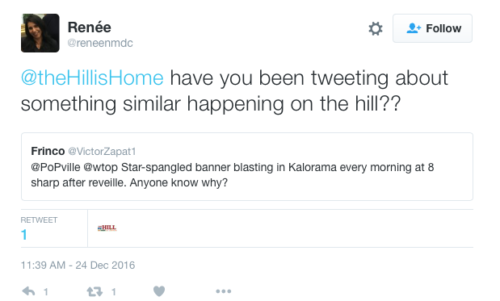 Weird, right? We sometimes forget that we live close to many military installations and, hence, take for granted the pageantry of the armed forces, which most of us respect and enjoy. However, we are not 100% sure what to make of the recent volume change.

Are you a public information officer? Are you an in-the-know neighbor? Do you have a Ph.D in sound engineering or acoustics or something like that? Help us out! Reach out through the comments, on Facebook or on Twitter and satisfy our curiosity.

8 responses to “Dear THIH: Is That The National Anthem or Am I Going Nuts?”