The Marine Barracks and their Grand Traditions 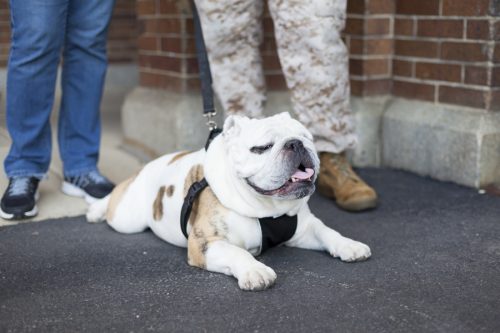 Cpl. Chesty XIV, regal yet a little afflicted by allergies, poses for a portrait in late March, 2016. Portrait by María Helena Carey

The Marines know how to do things right. As a former military spouse (ex-Navy), I always looked forward to going into Marine Corps bases. From the moment you are greeted at the gate, their pride of appearance and the friendliness they convey, everything about the Marines somehow makes you feel good about them. It’s no accident then that this neighborhood we call home and which is possibly the most welcoming neighborhood in all of DC (true statement) has very near its heart the Marine Corps Barracks. For those of you who don’t know, the Marine Barracks is the oldest active post in all of the Corps –serving and defending continuously since 1801– and is home to many proud traditions, starting with the Evening Parades happening every Friday at 8th and I. They house several units including the Drum and Bugle Corps– as a matter of fact, this post performs live bugle calls throughout the day: when you hear the mournful sounds of taps in the evening, you know there is a bugler at the other end, giving a once-in-a-lifetime performance for the corps and anyone who hears it, every day.

One of the best traditions, and possibly the cuddliest, has to be the tradition of the military dog. The Marine Barracks is also home to the Marines’ official mascot, Chesty, and I recently talked to Chesty’s mom and dad about their beloved baby. Chesty, as many of you may know, is an English bulldog. But what you may not know is that this particular Chesty is the fourteenth in a long, distinguished and highly pedigreed line of dogs, all of whom have been (for the main part) well-behaved ambassadors for the Marine Corps. This particular Chesty comes from a Virginia breeder, and was picked for his outgoing and friendly personality. The Mossers, Jason and Christine, were picked out of many Marine Corps families who petition to be Chesty’s host family. This is a great honor, in addition to being a wonderful opportunity to stay on base for as long as Chesty is required to be on active duty.

But who is Chesty XIV? What makes him tick? What are his hopes and dreams? How adorable is he, really? And will you actually squee if you see him in person?

Here are a few answers for you, dog lovers and mascot lovers and animal lovers out there:

First off, Chesty XIV is the official mascot of the Marines. There are many Marine Corps bases who keep bulldog mascots (as they ought), but –and let’s stop being so informal– Corporal Chesty XIV is the top dog, as well as Chief Morale Officer and, well, Chief Adorableness Officer. He greets guests and VIPs at every single Marine Barracks parade, during what could be deemed the three most adorable minutes in the whole revue. He is also responsible for wishing those who depart, ahem, fair winds and following seas. 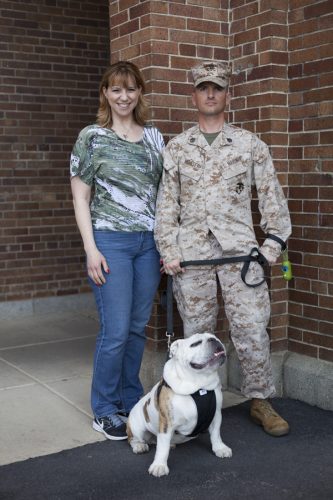 Cpl. Chesty XIV poses for a portrait with his human family, SSgt Jason Mosser and Christine Mosser at the historic Marine Corps Barracks. You can catch Chesty at every Friday parade during spring and summer. You can catch Jason as well, who is a bugler in the Drum and Bugle corps. Portrait by María Helena Carey

Cpl. Chesty XIV has many loves, chief among them meeting new friends. He is a gregarious and good-natured guy and loves walking around the Hill, where he has been raised with his human family and his cat brothers, from whom he has learned how to purr. He is also very fond of photo ops and of getting pets, and is the first Chesty to be featured prominently in social media. You can click here to see Chesty giving paw in our Instagram feed during National Puppy Day. (Warning: Extremely adorable.)

Chesty also enjoys visiting friends around the neighborhood. According to Christine, he can go from dead asleep to wide awake in a flash, if there is walkies involved. He likes to stop by and say hello to DCFD Engine 18 and Truck 7 up the street–he is very fond of the Fire department– and he loves getting treats at both Metro Mutts and Howl to the Chief, where he gets his grooming on. (It takes a village to keep a puppy looking good!) He loves playing at Marion Park and running around off-leash at the Barracks Annex, where he keeps his physique trim and drooly.

Cpl. Chesty loves all toys, although he is a bit rough on them. He prefers sticks to balls, although his favorite these days is a frisbee-like disc that he loves catching and chewing on. And even though he is an active social butterfly, when Chesty is done, he is D-O-N-E done! Christine, who keeps in touch with the families of a few of the former Chestys, tells me that the best piece of advice she ever received about living with a bulldog came from Chesty XIII’s dad: “Only walk a bulldog as far as you’re comfortable carrying him back.” (This advice could also apply to cranky three-year olds, to be honest.)

And yes, you will squee. Look at that face, will you? 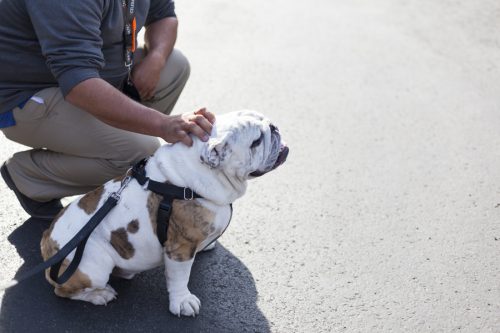 Chesty doing what he does best: soaking the love and the pets. Photo by María Helena Carey.

Don’t take our uniformed neighbors for granted: make sure you and your friends or family sign up for a Friday parade during any of the upcoming evenings. You can find out more details about the parades –duration, special needs, what to expect– by visiting the following link: http://www.barracks.marines.mil/Parades/EveningParade.aspx

The parade season has officially started and will continue through August 26th 2016. You can make a reservation through this link and think of the rich tradition that surrounds us every time you hear the bugle call. Thanks, neighbors and OORAH!