When researching the early history of Capitol Hill and the Navy Yard –particularly the neighborhood surrounding the Yard–, I discovered that there was one name being used that I was unfamiliar with: Navy Yard Hill. Today, I will look at this usage.

In the early years of Washington D.C., there were clearly two neighborhoods on what is today Capitol Hill: Capitol Hill itself and the Navy Yard. The latter did not refer just to the area owned by the government and used by the Navy to build, repair, and outfit ships, but also to the neighborhood beyond its gates, where those who worked at the Navy Yard lived. An ad from 1859 makes this distinction quite clear. Brothers William M. and Thomas J. Galt, whose wood and coal business was at the corner of 12th and C Streets, NW, announced that they “delivered to all parts of the city, Navy Yard, and Georgetown.” While separating the Navy Yard from the rest of Washington city was by no means the norm, it is also instructive in how people saw this neighborhood before the Civil War. 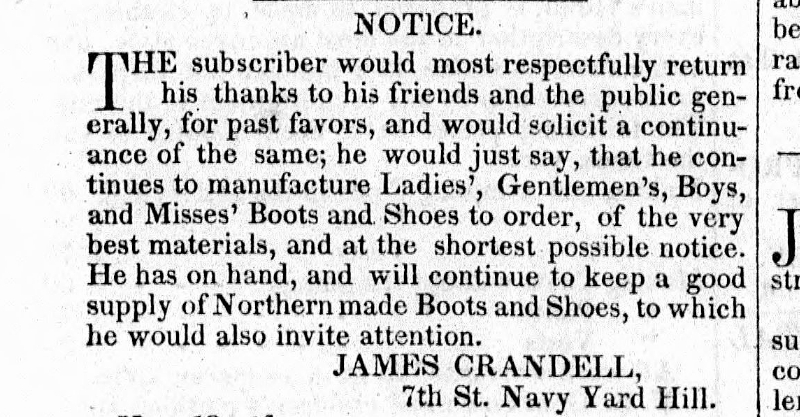 1845 advertisement for James Crandall, who along with selling clothing, was also a Justice of the Peace (LoC)

The 1822 city directory, which assigns not only an address, but a neighborhood, to each person listed, shows that the Navy Yard stretched from about 3rd Street East to 12th or 13th Streets – at which point there were simply no further inhabitants, not that there was another neighborhood there. The northern limit was about Pennsylvania Avenue, though in later years addresses north of East Capitol Street are listed as being in the Navy Yard: Clearly, like today, desirable neighborhoods had flexible boundaries.

As to the usage of Navy Yard Hill, it goes back to at least 1821, and describes the same area as above. It was in common usage up until the Civil War, and then fell into disuse –instead the simpler Navy Yard was used. Later, all of it was subsumed into Capitol Hill.

In general, it was rarely used by the newspaper reporters of the time, but much more frequently in the classified ads of the time, which presumably mirrored the residents’s usage.

One of the last times that the phrase “Navy Yard Hill” was used in a newspaper was in an interview with Colonel James A. Tait published by the Evening Star in 1882. Tait, who was some 67 years old at the time, reminisced about his time growing up on Capitol Hill, and how it differed from Navy Yard Hill:

Why the Navy Yard was quite a busy and thriving place. I could point out houses down there that must be nearly one hundred years old. There have been some changes since I was a boy down there, but not many. It was like two separate towns hen, with hills and ravines between. We boys used to have stone fights with the Navy Yard boys, and many a hard battle we had, too.

Later in the article, the reporter notes that, “in the early days of the city, what were called Navy Yard Hill and Capitol Hill, held very important positions with reference to the other parts of the city.” Today, of course, the two are one and the same, and the Navy Yard neighborhood is simply a subset of Capitol Hill. Given the explosive growth in that section, it may not be long before this is no longer true, however.