#GOPDebate Fun At Home & Around the Hill 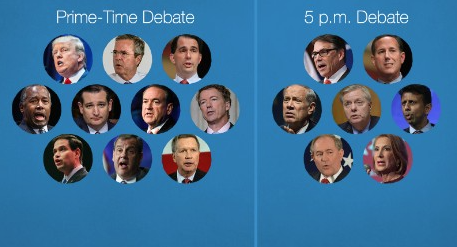 And then there were…. SEVENTEEN?! Courtesy CNN, via screenshot.

If you lived anyplace else, this would just be Thursday. But here in DC, everyone is gearing up to watch the first Republican candidate debate. If you’re a Republican, you are watching because you want to form an educated opinion on which candidate –out of 17* – cares most about your issues. The independents also seek education, probably. The Democrats watch to feel something close to the emotion that overcomes you when you watch a bunch of clowns coming out of a tiny car.

The first debate, airing at 5 p.m. EDT will feature the seven candidates that didn’t make the cut. The prime-time debate starts at 9 p.m. EDT on FOX News. Check out TIME’s guide to how to watch if you’re staying at home (okay, you can read their expert commentary as well). Check out DCist and Barred in DC if you will be watching/drinking around town. Check us and keep checking here as well as Twitter as we add Capitol Hill bars who will be showing the debate.

Tacos Impala, 1358 H Street NE: Debate with Tequila Avión and something called Trump Margaritas. I can only assume this Margarita insults you as you drink it and sports a very interesting stirrer, but I’m still waiting for Impala to tell me what it’s all about. Also, pork belly tacos, you guys. YOU GUYS.

Back to the debate: The best part is not the one about listening to great oratory and stirring calls to stand up and be a better nation. Nope: it’s the drinking games.

Below, a collection of the best ones the internet has to offer:

Cloture Club, authority in all things wonk, always brings their A-game in terms of drinking games. This year is no different and they captured my heart with their South Park reference.

The Wall Street Journal has their own bingo game and their own hashtag, #WSJGOPBINGO, which you use when you get five in a row. It is my personal belief that everything in life should let you yell BINGO! at a random moment. I approve.

The Washington Post has a very eggheaded post with charts to have on hand so you can play your own version of the Pinocchios at home (I assume). It’s not a drinking game, which is also very grown up. I say every time you have to use one of these charts to fact-check, you should take a shot.

Clear at the other end of the spectrum, Debate Drinking wants you to do exactly that. Their game has a lot of rules, but by keeping tabs on only one candidate, you cut down on the amount of distractions and focus on what’s truly important: Donald Trump’s hair, pomposity. What’s even more amazing? They have a real-time keyword ticker that will activate during the debate. High-tech, you guys.

Mashable gets the name-dropper award, because Dan Rather devised their drinking game. Dan’s game uses Trump as its basis, so it’ll make you think AND you’re probably going to get really drunk.

Rolling Stone has their own drinking game, because #drinkinggame.

Please drink responsibly and be safe. Don’t drink and drive!

*Number subject to changing dramatically, maybe even during the debate itself.