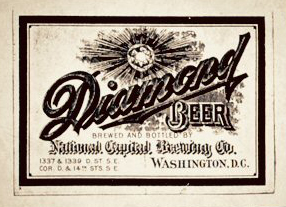 Label used for beer from the National Capital Brewing Co.

In my five years on the Hill, I’ve been incredibly pleased to see the changes, particularly in the restaurant scene. Lots of new favorites have opened up, while old ones keep getting better. Sadly, there are still a couple of niches that remained unfilled: 2 Amys should really consider opening a second store here. And it would be great to have a barbecue joint. And a cafe/bookstore (especially with the loss of Trover’s)

But what the Hill really needs is a brewery. A brewpub would be fine, but how about an honest-to-God brewery? One like the brewery that used to fill the square at 12th, 13th,D and E Streets? Follow me across the jump for a brief history of breweries on Capitol Hill. 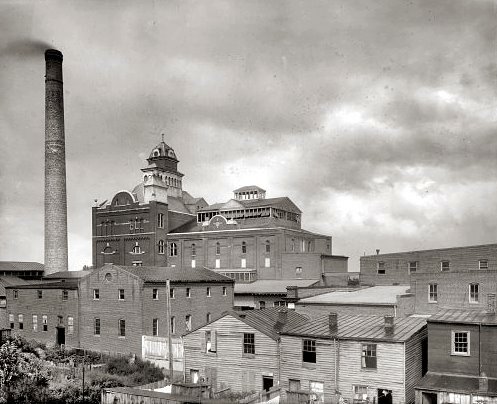 Albert Carry, born in Hechingen, Germany, arrived in DC in 1886. He bought a brewery on in the 500 block of 4th St., NE, but sold it a few years later. With the profits, he built a new brewery on the square bounded by 13th, 14th, D and E Streets, SE – the very location of our Safeway today. The National Capital Brewery, as it was called, opened to great fanfare in 1891. The Washington Star wrote about it thus:

A brewery that turns out 100,000 barrels of first-class pure beer every year for local consumption solely is a big institution for any city, and yet Washington has recently had just such an addition made to its business enterprises in the National Capital Brewery. Organized by Washington men, officered by Washington men, and with every share of its stock owned here at home, it would seem to be a local enterprise first last and all the time.

The article goes on to describe the purity of the beer, as well as the cleanliness of the establishment itself. A press officer couldn’t do a better job.

About 20 years later, on October 2 1912, the brewery was once again in the news, though not in a way to please Mr. Carry:

1 Body in Furnace; 1 Dead by Bullet

A mass of charred bones and human teeth, raked yesterday from an ashpit of a giant boiler in the engine room of the National Capital Brewing Company, and the dead body of Lentte L. Jett, fireman at the brewery, lying at his home with a self-inflicted bullet wound in his head, furnish a deep mystery which is baffling the police.

The bones are believed to be all that remain of Arthur A. Webster, at one time a close friend of Jett, and who disappeared on September 17 after he was seen to enter the brewery.

The brewery survived this negative publicity, but was not able to survive the threat of prohibition, switching to making ice cream in 1914, with Carry selling the business in 1918.

Today, none of the imposing building that Carry had built in 1891 remains, and only a few old newspaper articles remain to remind us of the beer-brewing aspirations, first met, then faded, of our predecessors on the Hill.

Thanks to the folks  at shorpy.com as well a capitolhillhistory.org for the information they have posted about this.