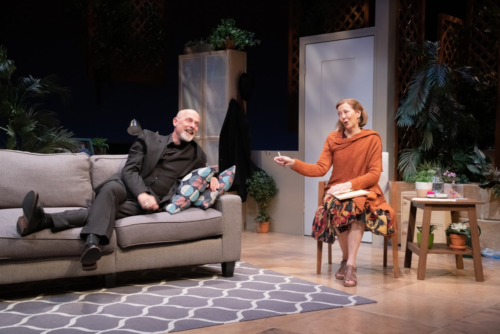 Mitchell Hébert as God and Kimberly Schraf as Ella in Oh, God. Photo by Stan Barouh and courtesy of Mosaic Theater Company

As always, Mosaic Theater Company knows how to pick works that pack an emotional punch delivering laughter, tears and a dose of frustration. Every play also sparks interesting post-show conversations. Oh, God, Anat Gov’s play about a Jewish Creator who seems to have lost his groove and the mortal who completes him– sort of– carries the tradition on handily. This play, which opened back in mid-December, has been extended. Now you can catch the show through Sunday, January 20.

Although the concept of a deity who comes to earth in order to interact with mortals is nothing new, seeing an Old Testament God come alive mirroring all the insecurities of your garden variety human is at once a puzzling and strangely comforting metaphor. What if God is one of us, indeed? Mitchell Hébert as God brings a good-natured male energy to the stage and plays well off Kimberly Schraf’s bristling Ella. Ella’s son, Lior, who is in the Autistic spectrum and whose character delivers the emotional crescendo with just one well-timed act at the end of the comedy, is played by Cameron Sean McCoy with compassion and care.

It is Ella’s thankless role to carry the straight woman act, first as a mental health professional and then as a doubly disbelieving lapsed believer. It’s a tricky balance, but she pulls it off. We are carried through the 90-minute performance by three pairs of competent hands and left to wonder about where a higher power truly resides for the rest of the evening.

WHY: Because you resolved to have more mind-expanding, paradigm-questioning, world-class theater in your life in 2019, right?