Happy December 18, everyone! Can you believe that in exactly two weeks’ time, 2018 will have been but a distant memory? My, how time flies when you’re watching the news with your jaw agape, amirite?

Anyway, what is the Capitol Hill buzz around the interwebs? 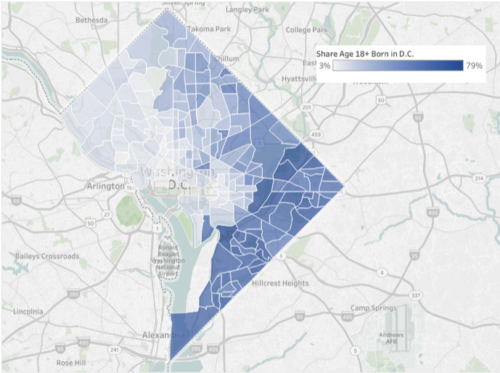 How blue is your part of DC? Map by the DC Policy Center, via Curbed

There’s been some momentum regarding a petition titled Hail No RFK, started by Ward 6 Councilmember Charles Allen. Here at The Hill is Home, we are firmly in agreement that bringing back a football stadium to the RFK site is not what Hill East residents want or need, and that there are better ways to use the land. Reporting on the petition from DCist.

Michael Whatley, Jr., the man who attempted to rob the Whole Foods on H Street a couple of weeks ago and shot a cashier, might not be mentally competent to stand trial. He’s been transferred to St Elizabeths, where he will undergo a 30-day psychiatric evaluation. More details over at the Washington Post.

Happy 3 millionth passenger, DC Streetcar! There are many who hate you, but there is nothing but love and gratitude in my heart for you– even if you’re still not making money. Progressive Railroading

DGS wants to make nice and work with the community in the Eastern Market Metro Park redesign– a dramatic change from two nights earlier, when DGS was more… DGS-y, if you will. Larry Janezich has a summary of last week’s initial meetings. Capitol Hill Corner

It’s soup and shabu-shabu weather starting tomorrow over at Whaley’s… um… Fuyu. Eater has all the details.

While we’re on the subject of soup for the winter (and tacos?), Yang’s Hot Pot opened last week in the  Impala Taqueria space. Washington City Paper

Coming soon: No one should have to face the indignity of generic chicken wings, apparently. You’re in luck, Nats fans. Eater

Spotted by Locals experienced the joy of a bottomless brunch at Ambar. Hope they got a good nap in afterward.

Everyone in the District should experience the joy of scootering and saving time on their commute, and east-of-the-River neighbors should also get to shake their fist angrily at the scooters left on their paths. The latest on our city’s gaping inequality over at the Post.

Most native Washingtonians live in the eastern side of the city and this Curbed article tells us more about it, in a nuanced article that talks about gentrification, construction and a changing DC landscape.