Pop, hardcore, and the 2018 Fall Classic are all on deck for the next three weeks of local music! 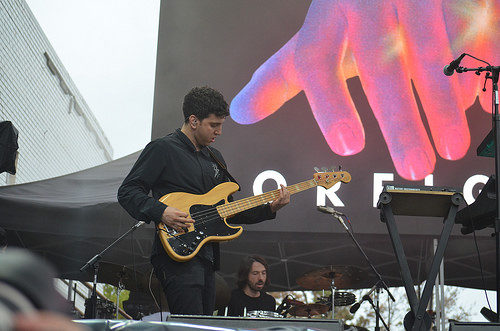 Jacob Michael of Foreign Air at the 2017 Fall Classic. Photo by Claudia Rauch.

Ryan Marshall Lawhon and his brother Taylor make up Mating Ritual, an LA-based pop duo. The duo’s 2017 debut album, How You Gonna Stop It? opened new doors for the group and led to collaborations with other LA artists. Their sophomore album, Light Myself On Fire, was released this past May. Its darker and grittier sound, touching on maturation and commitment, has been well received by fans. Don’t miss Mating Ritual at the Rock & Roll Hotel on September 22. Tickets are available now!

Highly Suspect has taken the rock world by storm with their 2015 debut full-length Mister Asylum. That album earned the band a Grammy nomination for the Best Rock Album and a Best Rock Song nomination for “Lydia.” Highly Suspect’s second LP, The Boy Who Died Wolf, hit number 1 on the US Alternative Charts. Highly Suspect is headed to the capital on September 28 at the 9:30 Club. Get your tickets here.

The DC-based trio known as SHAED artfully combines electronica and pop into a sound that you won’t soon forget. Their mix of bright, groovy, and retro beats coupled with incredibly smooth vocals will immediately capture your attention. The trio is comprised of twin brother producers/multi-instrumentalists Max and Spencer Ernst, and Chelsea Lee, who lends her powerhouse vocals to SHAED as the lead singer. Learn more about the band in our interview with Lee. The band has toured with Bishop Briggs, Marian Hill, VERITE, and Sir Sly. This show is perfect for fans of Phantogram, Alt-J, and Sylvan Esso. Check out SHAED on September 29 at the Rock & Roll Hotel. Tickets are available now.

The All Things Go Fall Classic is back to kick off October! Since 2014, the Fall Classic has been bringing emerging and established acts to the stage at DC’s historic Union Market. The event also features local food vendors and interactive features for everyone to enjoy. Maggie Rogers, Billie Eilish, Borns, and Carly Rae Jepsen will headline the festival on Saturday and Sunday. Head out to Union Market on October 6 and 7. Check out the full lineup and snag the remaining General Admission and VIP tickets here.

Taking their time isn’t exactly Pears’ strong suit. This New Orleans hardcore band released their first demo just days after the band’s first practice and their debut album, Go To Prison, was released just five weeks later. Their recently released split LP with Direct Hit! had the band touring nonstop. They are now back on the road and headed to DC this week. Don’t miss Pears at The Pinch on September 20. Doors open at 7 pm. This all-ages show is only $10 and features three supporting DC bands!