Car Break-Ins: A Somewhat-Preventable Part of Living in the City 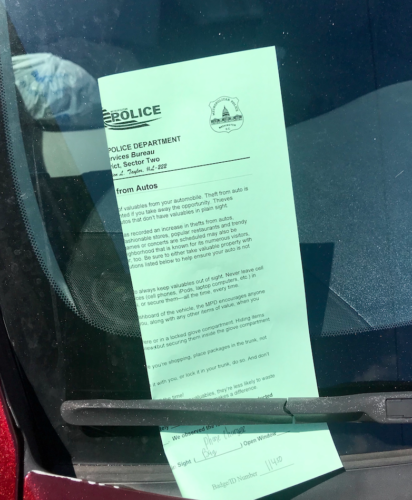 Recently, we had several readers engage us on Twitter regarding car break-ins. While having your car broken into, or what the police calls “theft from car,” is an annoying but mundane part of living in the city, the tweets from several neighbors claiming there was an increase in these thefts gave us pause:

It started with a tweet from reader Shannon McDonald:

@theHillisHome car break-ins seem to be a thing again on the northeast side of Lincoln Park. Nothing stolen, things jostled through, car was definitely locked—probably looking for a key.

It’s been rampant on other side of the park too. South Carolina, C, and Walter, specifically.

Car gone through north of Lincoln Park. Left a $10 bill but took all the change.

ANC commissioner Denise Krepp weighed in. Her car was broken into a couple of days after this tweet.

Not an uptick. Steady rate. My car has been broken into several times in the past year. Thieves steal change and go through glove compartment.

Reader Beth H. turns out to be right on the money. Read on for more.

Can’t speak for Jun-Aug as I’ve been away, but April-May saw many more car break ins near 3 & MA NE. Contacted police to see if they had extra patrol, etc & they just recommended I keep nothing visible in my car.

Reader @FoodLoveandShiloh had a useful tip. Click through to see her full tweets.

My car got broken into 2X last year while it was locked (nothing was taken). I read about people using a “signal extender” that uses your car fob to open your car. I bought a signal blocker on Amazon for $10 & put my keys inside every night. Hasn’t happened since {knock on wood}

Let’s see…we’ve had it happen five times over the last five years or so, but none in the last year. I have come to thinking of the broken green glass that is on pretty much every sidewalk as Capitol Hill snow.

Cars in garages are not safe, as it turns out.

Our garage has seen a significant uptick. Caught this kid on video. He smashed windows of any car with stuff visible through window. pic.twitter.com/4zeG2XP0pm 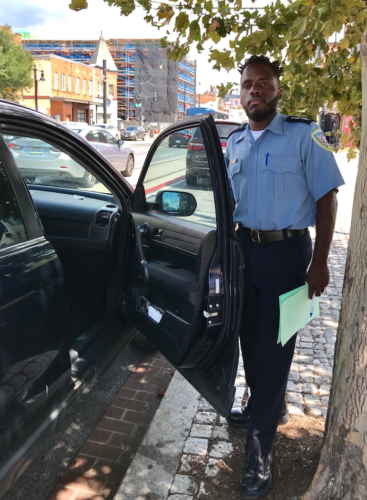 A police cadet stands next to an open car door. During the walk, we encountered seven more open cars. Photo by Maria Helena Carey

What seems to be the problem? If you go to DC’s excellent Crime Cards database, you see that throughout Ward 6,which comprises PSAs 104, 107 and 108 (and parts of 103), crime is down overall. However, there is an area just south of H Street NE, in ANC 6A, where there has been an increase in this kind of petty crime. Lieutenant Damion Taylor invited me to come to one of several community outreach walks–which were highlighted recently in the Washington Post. The purpose of these checks is to increase police visibility and to make the public more aware of the ways in which their car can be more attractive to this crime of opportunity. I walked with Lt. Taylor, Officer Marshall and several police cadets down H Street around 1 p.m. on Friday August 31. As we made our way from the 600 block to the 1400 block of H Street NE, the officers checked 107 parked cars and left 37 notices on windshields, letting owners know that their car could be a target for theft. During the walk, we also came across eight completely unlocked cars. One of the open cars had a full diaper bag and a baby seat.

How can some cars appear more vulnerable than others? It may seem like leaving a charger or some change visible in your car would make no difference at all, but according to Lt. Taylor, that is not the case. In one particular instance, one of the cars that received a notice had an opened packet of Armor-All brand wipes sitting innocently on the windshield. Lt. Taylor told me that a case of wipes is the kind of thing that can be resold and if there is an opportunity to break into a car to get it, someone might do it.

The focus of this outreach is not about victim blaming as much as it is about car owners becoming more self-aware in general. Unfortunately, some cars are just more attractive to break into than others due to their being parked in a quiet and more residential location. The gradual increase in wealth in our area has also made thefts from cars more attractive overall. However, there are certain measures that neighbors can take in order to deter people from breaking into their cars to a larger extent.

What are some things you can do to avoid seeing the dreaded “Capitol Hill snow” around your car? Here are some tips from the notice that people received from the police on Friday:

Keep Your Valuables Out of Sight

This may be as obvious to you as not leaving your iPhone lying around. However, in the short walk I took with police, I was surprised to see good tools, expensive shoes and gym bags left behind in car seats. A Special Police officer who came to talk to us during our walk said her car was broken into and the perpetrator took a nice reusable bag and a box of chocolate chip and raisin cookies from her car. You may not think you have valuables, but let’s face it: Cookies are delicious. (Are they worth going through the hassle of breaking into a car? Apparently.)

Anything that can be taken relatively easily will make your car more enticing. This also goes for chargers of any kind. Lt. Taylor and  Ofc. Marshall explained that any cable could potentially be connected to something more valuable. Maybe it’s not worth a gamble in broad daylight, but at night, things are different.

It’s a much safer place to store things and you can’t see what’s in it. Anytime you have an extra bag or parcels, such as presents or shopping bags, leave them in the trunk. This goes double for things such as medication. One of the cars we came across had a large bag of prescription medication clearly visible, which instantly makes your car’s contents a hot commodity.

It seems obvious, but there were eight wide-open cars during our Friday walk (that’s about 7% of the parked cars we saw). The policemen were able to approach these cars, listen to the alarms going off (on a couple of occasions) and still have time to lock the doors again and write a note without anyone coming around. I am a little paranoid about locking my car, but the one time I got distracted and forgot to lock it was the time my iPod was stolen out of my car. In the words of Francis Bacon, “Opportunity makes a thief.”