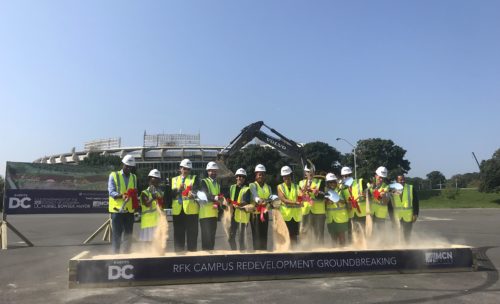 Everyone posing with shovels and kicking up the dust cloud. The doomed RFK stadium looms in the distance.

Seven years of meetings, planning sessions and general back-and-forth culminated in today’s official groundbreaking at RFK’s Lot 7. Greg O’Dell, Events DC’s CEO opened the ceremony and introduced Max Brown, Events DC Board Chairman, who in turn introduced Mayor Muriel Bowser, Ward 7 councilmember Vincent Gray, Ward 6 Councilmember Charles Allen and Ward 2 Councilmember Jack Evans. Throughout the event, the city leaders were appreciative of neighbors’ input and ideas. Gray and Allen in particular focused on how bringing Wards 6 and 7 together is an important and worthy goal, and all focused on the importance of sports like soccer and baseball and how they bring communities together. Evans, in particular, referred to sports as “one of the defining things of a city… a unifier.” Mayor Bowser was proud of all that’s been accomplished over the past few years in terms of growth– she took time to list present and upcoming projects, such as the Carnegie Library, soon to be an Apple store.

While it is true that sports teams have revitalized areas of the city, let’s not hope these speeches were laying the groundwork for the Washington Team is coming back to RFK, especially now that the parking lots are being converted to nice things for the neighbors. (Make sure you read Andrew Giambrone’s live tweets of the event by clicking here.) This series of tweets by the Washington Post’s Jonathan O’Connell, who was reporting on a lunch that Mayor Bowser held right after this event, give me pause. (Click below to read the whole thread)

DC Mayor Muriel Bowser just gave speech to VIP Redskins crowd pitching DC as the team’s home. She said the team’s name, she said they need to be “home.” She left no doubt: She wants an NFL stadium.

Today’s groundbreaking was ceremonial in nature: The actual breaking of the ground and removal of the asphalt, etc., will happen starting in September. This, of course, brings up several issues: Where will things be staged? How will this affect the Reservation 13 project and Hill East residents? What about the traffic? Will traffic to and from Ward 7 be disrupted significantly? What about the environmental repercussions of construction? Is there lead in the parking lots?

If you have questions about how this new project will affect the Reservation 13 project (and, obviously, questions about R13), make sure you attend the meeting happening tomorrow, August 30, starting at 7 p.m. at St. Coletta of Greater Washington (1900 Independence Avenue SE). It’s open to the public and open to your (pertinent) questions, so you should definitely come.

The only dirt that was kicked up at today’s event was a sandbox in which to dip the beribboned shovels. Pictures below for your viewing pleasure. (All photos by Maria Helena Carey) 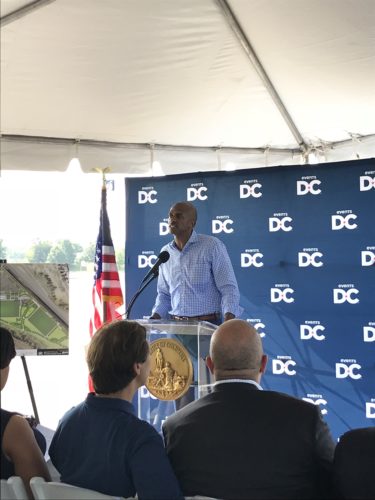 Greg O’Dell starts off the ceremony. 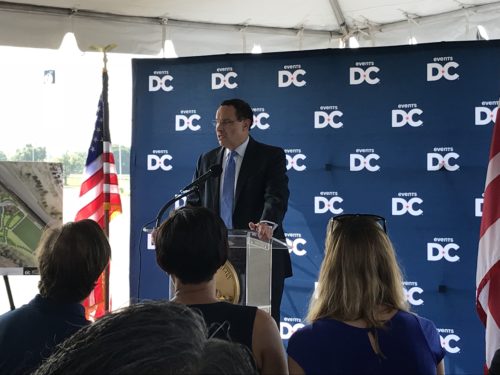 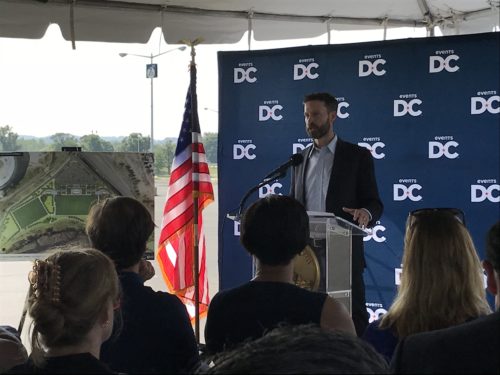 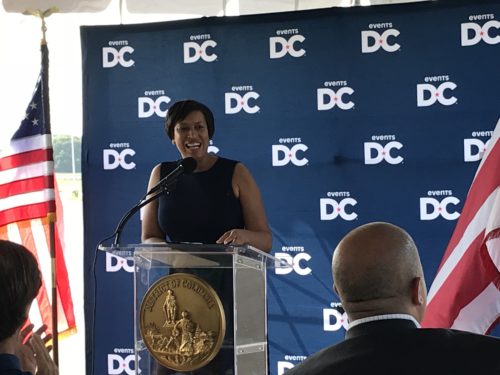