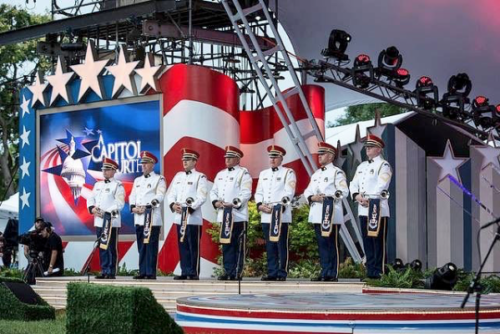 Photo courtesy of the US Army band, via our Instagram hashtag #thehillishome. Go see the Capitol Fourth concert tonight!!

Ah, a Fourth of July in DC makes us want to don our best red, white and blue with stars –but NOT the Panama flag, grandma!– and eat all the hotdogs and complain that there is no soccer game on tomorrow (prob just me). What else can we do and how can we get around during the celebration of everyone’s favorite Cancer nation* with Sagittarius rising and a crazy-pants Aquarius moon. Aw, America!

If you’re wondering what will be open or how to beat the heat this Wednesday, Fourth of July, you can go to any DC Parks and Recreation Pool or spray park that is an outdoor facility. All outdoor facilities will be open from 11 a.m. until 6 p.m. during the holiday, per DPR. Need to check the location of the nearest spray park? Go here. Remember that we have beautiful water fixtures at both Canal Park and the Yards Park, and now at the District Wharf as well!

However, with a high of 90 degrees, you should be careful tomorrow. While it is not today’s scorcher, the heat can still make you weak. Here are a few things to keep in mind:

Join your community at the Barracks Row Fourth of July parade! You can march with friends, school, neighbors or our Ward 6 councilmember, Charles Allen. Just show up at 9:15 a.m. and you can shop for options! More parade info here.

Per the National Park Service, here is a list of street closures:

Closed from 3 p.m. until approximately midnight

Want more info on the Capitol Fourth concert? Click here. NOTE: If you want to see the concert without the crowds, go TODAY! Don’t tell your friends 😉

You know what is open at the National Mall, though? The Smithsonian Folklife Festival! More info here: https://festival.si.edu