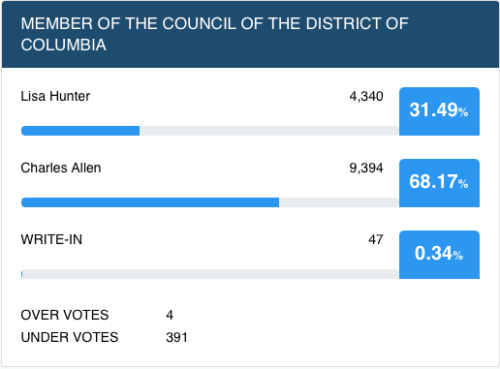 The DC primary elections took place yesterday, June 19, and the results were available on the DC Board of Elections and Ethics website as early as 10 p.m. last night– though DCBOEE is cautious to say that these are not official results until declared so. As of 11 a.m. this morning, the results have not been declared official: This raises the question of why we all race to report results if they aren’t official for over 12 hours after the elections are over.

Bureaucracy aside, the results favored the incumbents in all races: Mayor Muriel Bowser coasted to an easy victory over James Butler and Ernest E. Johnson– a challenger whose name I only saw on the BOE site last night– with 83% of the vote. Eleanor Holmes Norton will continue being our non-voting Delegate to the House of Representatives for a 15th term, handily defeating challenger Kim R. Ford with over 76% of the vote.

In Ward 6, Charles Allen defeated challenger Lisa Hunter, obtaining 68% of the vote. Republican Michael Bekesha, who ran uncontested in this primary election, will go on to challenge Charles Allen in the November general election.

Phil Mendelson held on to the chairmanship of the council, defeating Ed Lazare with over 62% of the vote.

Michael D. Brown will be Shadow Senator for another term after defeating challenger Andria Thomas. This was a close race, 51.9% vs 48.1%.

Finally, Initiative 77, on whether to phase out subminimum wage and increase the minimum wage for tipped workers, passed last night with 55.1% of the vote. Initiative 77 will now be discussed by the Council of the District of Columbia. The Council can block the initiative altogether or modify it.

For more results, you can go to the DCBOEE website.