Over the next three weeks, leading up to the Capital Pride Festival, beginning on June 7, I will look at some of the sites connected with LGBT history on the Hill. We will start today with the place where many of my stories end: Congressional Cemetery.

In the 1980s, at the height of the AIDS epidemic, an almost-45 year old ex-Air Force Sergeant named Leonard Matlovich discovered that he had contracted the disease. Knowing that his time was short, he looked for a suitable place for his remains. At the time, cemeteries across the country were leery of accepting AIDS victims, so Matlovich, who had led a well-publicized struggle against the Pentagon in hopes of being allowed to remain in the Air Force in spite of his sexuality, had to look beyond his home in San Francisco. He eventually settled on Congressional Cemetery, and specifically chose to be buried in the same row that contains both J. Edgar Hoover and Hoover’s long-time friend, Clyde Tolson.

Matlovich was not the first gay man buried at Congressional. The Cemetery’s LGBT Community walking tour shows Peter Boyle –Walt Whitman’s “greatest love”– and there were, presumably, others less well-known.

In some of cases, such as Alain Leroy Locke, the burial came long after his death. Locke, who had been the first African American Rhodes scholar, and is believed to have been the first gay one, died in 1954, after forty years teaching philosophy at Howard University. Sixty years after his death, his remains were interred at Congressional.

While Locke and Boyle are buried well away from Matlovich (and Hoover) a number of other prominent members of the LGBT community have chosen the general area, and, in fact, the bulk of the Cemetery Tour is clustered at the corner of Henderson and Ingle Streets. Some, like Thomas ‘Gator’ Swann are not yet buried there, but have put up their grave markers near Matlovich’s grave.

While most markers follow Matlovich’s choice of an engraved and polished granite stone, there is one grave that stands out: Franklin Kameny’s.

Frank Kameny was an early activist in the gay rights movement. He had been fired from the Army when he was outed, and became the first to fight his dismissal. He would later lead multiple protests, and founded numerous societies. One of the cases he was involved in was Matlovich’s; Kameny felt that Matlovich’s exemplary service record made him a perfect candidate to succeed where Kameny had failed. 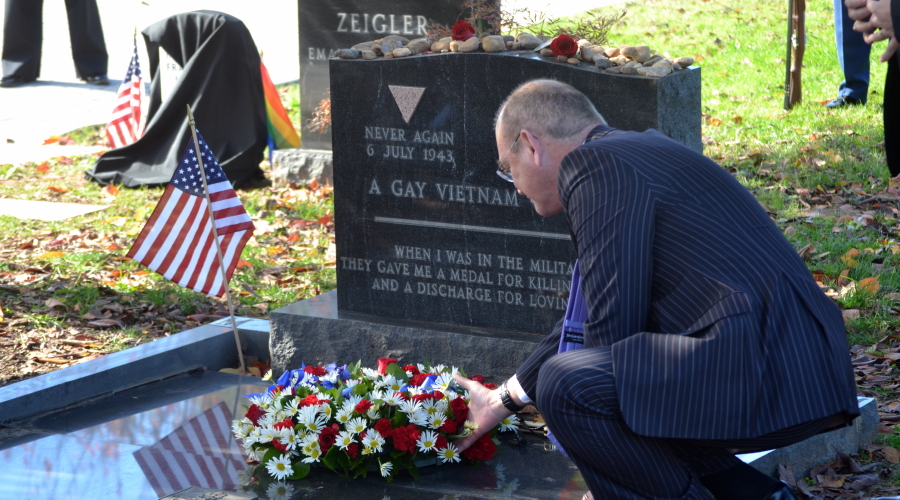 A wreath being laid on the grave of Leonard Matlovich on November 11, 2015. Frank Kameny’s grave is just to the left. (RSP)

Kameny died in 2011. On Veterans Day, 2015, a memorial stone to him was unveiled at Congressional Cemetery, just behind the Matlovich headstone. It is a simple, government-furnished headstone that represents the majority of markers in national cemeteries such as the one in Arlington.

If you are interested in learning more, the Cemetery has a self-guided walking tour showing the locations of these and other graves. It can be found here. The cemetery also occasionally conducts tours with a LGBT theme. Look on their calendar to see when there might be another.