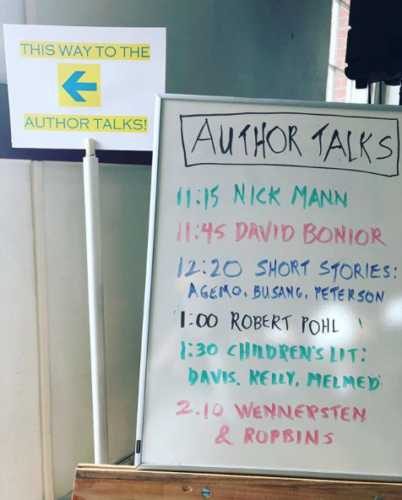 Capitol Hill’s biggest book event of the year took place last Sunday in the north hall of Eastern Market. Some 40 authors from the Hill or who write Hill-related material were there to talk with their readers, and maybe sell a few copies of their works.

The weather cooperated, with the forecast rain holding off and ensuring that their was a steady stream of customers from well before the opening time of 11:00 a.m. to 3:00 p.m. While the authors had pride of place in the center of the hall, there was plenty of space around the perimeter for vendors and exhibitors, leading off with East City Books, who handled sales for those authors who did not do so on their own.

While the southeast corner held a small space for children to hear stories and work on crafts, a tent was set up outside for authors to give talks about their books. Several new innovations were added here, with panels on “Publishing Short Works” and “Writing and Publishing Books for Children” joining the usual author talks. Also new was the first Michael Fry talk on local history. Fry, a longtime waiter and manager of Mr. Henry’s, was a supporter of the BookFest from the beginning, and, after his death, money collected by his friends was used to support a history lecture.

At 3:00, as the last visitors departed the hall, leaving the foot-sore authors to pack up their wares, the party crossed 7th Street to Tunnicliffs, where the Poet’s Corner took over the patio. A number of invited local poets read from their oeuvre, after which the mike was turned over to any one who had something to share.

It was an excellent end to a successful day all around.