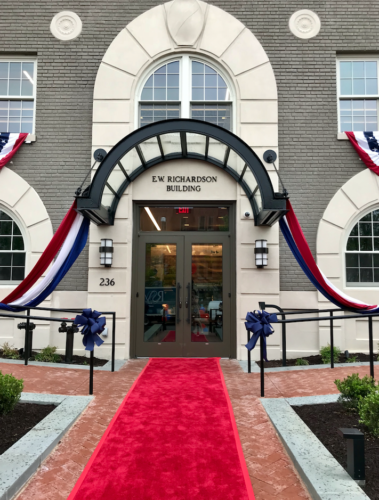 In welcome news to neighbors and commuters along Massachusetts Avenue NE between 2nd and 3rd Streets, the intern housing building at 236 Massachusetts Avenue NE is now open and was officially dedicated in a ceremony this morning. Now named the E.W. Richardson building, in honor of a World War II B-24 Liberator pilot who went on to own one of the biggest car dealerships in the southwest, 236 Massachusetts is a larger part of the Heritage Foundation complex and a six-story intern house and facility. The Richardson family made a generous contribution in honor of E.W. to the Heritage Foundation, to commemorate the patriarch’s ideals and his service. The décor echoes Richardson’s career as a pilot, and was created by artist and veteran Joshua Vandenbrink: one of the salient features is a United States flag carved out of wood, which can be seen from the exterior doors.

The structure was completely gutted from the inside but the façade remained so as to allow the builders to preserve the footprint of the building. Now that the main part of the construction is over, interns and resident advisors are moving back in. We were told the 62 new interns who will occupy the building are moving in on Saturday, May 19, so neighbors should expect a fair amount of traffic around the area on this date. The space has been redesigned to serve the needs of interns on Capitol Hill better, both for sleeping quarters as well as for studying.

The building will also have room for three commercial tenants, all of which will be some sort of restaurant. The two original spaces have a new addition: a cafeteria style restaurant which will operate on the basement level, with entrance on 3rd Street NE. Originally, the Heritage Foundation had approached Chick-fil-A to be one of the tenants; however, Chick-fil-A’s preferred mode of service is drive-through and the deal did not materialize. Instead, they have approached local DC chains to fill all three spots. No word on who will come in just yet, but we have heard a rumor that the bagel-shaped void left behind by Bagels and Baguettes may be filled in kind.

Meanwhile, the former Armand’s next door will be razed sometime this summer, and a conference center will go up in its stead: this conference center will connect to 236. The building will rise slightly higher than the existing house, but it will still be shorter than Richardson building and will have a rooftop terrace. The Richardson boasts a sustainable rooftop with a garden.

We look forward to seeing an end to construction as we wonder which tenants will come to revitalize this corner. 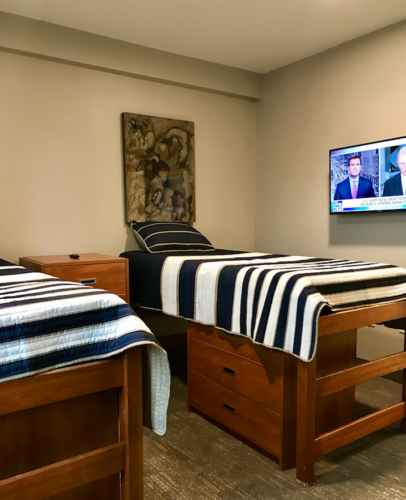 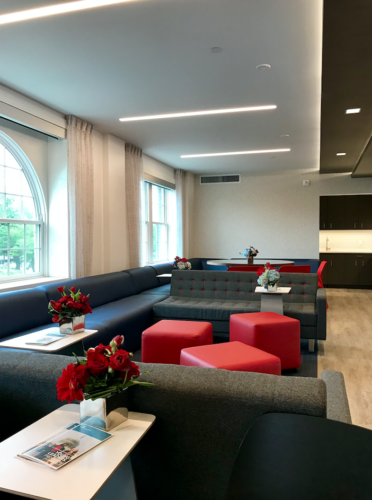 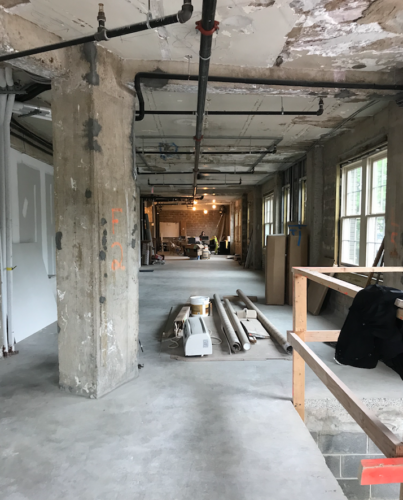 The former space of Bagels and Baguettes. Photo by Maria Helena Carey.