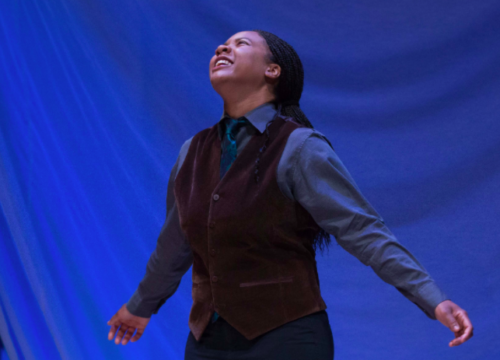 Photo courtesy of the Folger Theatre

While it has become less and less the case, Washington can be a reserved place where the status quo limits change, and passion and action-oriented enthusiasm gets squashed. There is no such tamping down in the award-winning Bedlam Theatre Company’s production of Saint Joan at the Folger Theatre. Joan and her message are as powerful as a freshman lawmaker’s impassioned first appearance on the floor of the House or Senate.

Thinking about it, Joan and Senator Elizabeth Warren might have been separated at birth. But Joan has God on her side and her risks are more perilous.

For those of us who don’t study church history, 18 year-old Joan of Arc, the national heroine of France, led the French army to victory over the English at Orléans. Captured a year later, she was burned at the stake as a heretic by the English and their French collaborators. In a major reversal, the Roman Catholic Church canonized Joan as a Roman Catholic saint in 1920, more than 500 years later.

Dria Brown shines as the prideful French peasant Joan, with oratory skills similar to those of the much-talked about Bishop Michael Curry,  Her impassioned speeches launched war-weary soldiers onto French battle fields, are also a call to action to those believers among us to develop a personal relationship with God. That invocation endangers the English and French gentry and bloated and self-enriching Catholic Church. After efforts to make her recant, Joan is sentenced and put to death.

Speaking of kings, lords, cardinals and priests, artistic director Eric Tucker, joined by Edmund Lewis and Sam Massaro bring to mind whirling dervishes as they play 25 different characters during the two-intermission performance. This is a complex story with historical figures moving chess pieces across Europe, and these three men pull it off on a bare stage. They effortlessly switch from one character to the next with a wealth of accents and postural changes. In one of the last scenes during Joan’s trial, their voices echo from changing positions throughout the theatre showcasing the variety of voices they each take on.

This production seems a distant cousin of other George Bernard Shaw plays I have seen. Its clarity –and Joan’s absolute certitude and willingness to live what she believes– is refreshing. Saint Joan is a powerful charge to viewers to take a stand for their  spiritual or political beliefs.

Saint Joan runs three hours with two 15-minute intermissions. The production runs through June 10. Tickets are available here. Join the Folger’s Resident Dramaturg Michele Osherow on Thursday, May 31, for a post-show discussion. Thinking Shakespeare Live, a free 90-minute demonstration of Shakespeare’s language, will be led by authors on his works on Friday, June 1. The event is part of the Free Folger Friday series and and is scheduled for 5:30 p.m.