Trusty’s Set for Live Music; Torai to Offer Sake (Beer and Wine too) 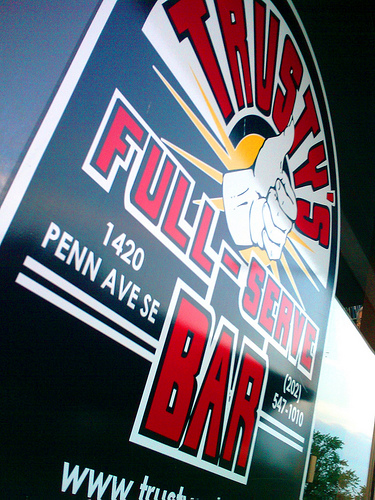 Barred in DC is a lawyer by day who keeps a blog about drinking establishments in the District by night. He’s also a Hill East resident and member of the ANC Alcohol Beverage Administration committee. This  post does not necessarily reflect or constitute the views of ABRA nor the Committee.

Trusty’s, 1420 Pennsylvania Avenue SE, the beloved neighborhood bar in Hill East, is on track to host live bands and other entertainment both inside and on its 2nd floor deck. On Tuesday April 10, ANC 6B concurred with the ANC’s Alcohol Beverage Control Committee recommendation to support Trusty’s request for an entertainment endorsement. (You can see Barred in DC for an explainer.)
At the committee’s meeting last Thursday, co-owner Mark Menard explained the rationale for asking for an endorsement after nearly 13 years in business, saying that patrons and neighbors have asked for a venue for schools and local organization fundraisers, as well as local musicians. Menard specifically mentioned King Bullfrog, ” a high-energy acoustic duo playing folk, blues, world, and original music for children and their grown-ups,” as a musical act that would be featured. The ANC supported hours of entertainment beginning at 10 a.m. for both inside and outside, and until closing inside; at midnight Sunday through Thursday; and at 1 a.m. Friday through Saturday on the 2nd floor deck (which fits about 25-30 folks).

The request now goes to the Alcohol Beverage Regulation Administration (ABRA) for approval; we can expect the first event late to happen in the spring/early summer.

In other liquor licensing news, the ANC also supported a beer/wine license for the new Asian Barracks Row eatery, Torai. In response to customer requests (particularly for sake), Torai, which will close at 10 p.m., will serve bottled beer, wine and sake once their liquor license is approved by ABRA.