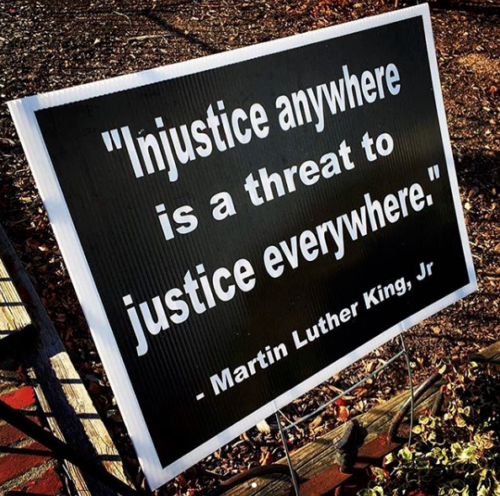 Photo by @monikerdc, via The Hill is Home’s Instagram

Around Dr. Martin Luther King’s birthday, we shared a photo of one of the many signs that have cropped up around the Hill since before inauguration day last year. The quote, by Dr. King, reads: “Injustice anywhere is a threat to justice everywhere.” It’s just one of the many quotes that Meg van Achterberg turned to around this time last year. No matter what your political leaning is, we can all agree that the last election cycle was very hurtful and divisive. Van Achterberg, who is a psychiatrist, was keenly aware of needing some sort of healing. She kept coming back to a quote by Dr. King in particular, “Darkness cannot drive out darkness, only light can do that; hate cannot drive out hate, only love can do that.”

But then, contemplating the wealth of powerful quotes from a fine orator, she started to have an idea: “How about if everyone had quotes? [Dr. King] said so many good things, what if people had different quotes in their yard?” Although she realized this could be perceived as a political statement, it could also be a way to bring neighbors together: What kind of ideas do we want to uphold? What kind of values define us? Van Achterberg went through supercheapsigns.com and designed her own series of simple signs with several quotes. She went around to her neighbors, asking them if they would like a sign, remembering how in past inauguration days people have walked down East Capitol Street and other main thoroughfares around Capitol Hill.

What she did not expect was the response. What started as just a simple ask from neighbors– share an inspirational sign– became a movement that inspired other neighbors to reproduce similar quotes in a slightly different layout. “What’s surprised me most is how long people have kept [the signs] up,” she tells me. Neighbors and strangers wanted signs so much, they even offered to cover costs of printing. She set up a Facebook page, MLK Signs, which you can still follow, although van Achterberg is taking a break for now.

I have eight signs to give away, left over from a last printing. If you want a sign, leave me a comment!

12 responses to “Reader Question: Who’s Behind the MLK Signs?”