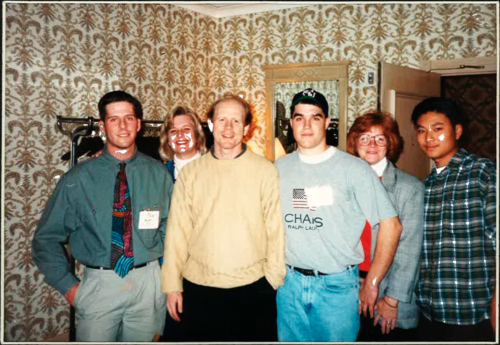 Remember how a long, long time ago we had a feature where we shared five questions we asked from a local business? We decided to bring it back! Our first installment comes courtesy of Brent Lightner, founder of Taoti Creative on Barracks Row. Taoti stands for The Art of The Internet. (Clever, huh?) They specialize in creative internet solutions such as design, engagement, digital organization– a.k.a., The Internet of Things– as well as public relations and other services. The answers below have been edited for style and clarity.

How did you first involved in with the art of the internet/the internet of things?

It’s a long story, but in short, I needed money for college, so I found a scholarship competition to build educational websites. This was 1995. Prize money was up to $25K, so I taught myself web design, built “The Interactive Music Emporium,” a site that used animated gifs —which were totally cool back then, I promise— to illustrate how musical instruments work. I ended up winning 2nd place in my category in this competition called ThinkQuest. The organizers brought me to DC where Sinbad hosted the award ceremony and Ron Howard Personally presented my team with our award.  [In the picture above] that’s me in the green.  Consequently, that might have been the last time I wore a tie.

That prize garnered some great PR from the Wall Street Journal, Der Spiegel, etc. The calls started coming into my dorm room.  So I spent much of my college career building websites to pay for school.  My school even featured me on the cover of their magazine.  I was a med/biochem major, but building websites was starting to look like a career for me, so I struck a deal with my college in which I agreed to get accepted to med school (they were a small school and every acceptance really mattered for their stats) in exchange for getting to do a full credit internship for my own company. I did both, graduated, and while I consider Taoti to have been established in 1996 (when I built my first site for pay), I incorporated in VA in 2001 and moved to Old Town to focus on Taoti full time.  We moved our incorporation to DC in 2004.  The rest is history.

What sorts of trends do you see in your line of work?

From an industry perspective, the main trend is towards innovation and a focus on results—not deliverables.  It used to be that technical ability set you apart, but as the tools get better and the technology more ubiquitous, the industry leaders today (like Taoti) are those more focused on what can be done with the technology—not the technology itself.  In particular, I find that space between the digital and the physical realms fascinating and with huge room for pioneering.  VR, AR, IoT, etc… these (and many other) technologies and paradigms are letting us blur the lines between real and virtual, making for some very cool (and very effective) experiential marketing plays.  I don’t mind saying that for the past two decades, the world has largely known Taoti as a web dev shop. But these days, if I hear an employee refer to us that way, I smack them on the wrist with a ruler (figuratively speaking, of course) and correct them: “We’re a creative agency.”  Yes, the lion’s share of our work is still very much web and digitally based, but not only are we into a lot of other things these days, it’s more about the point: that we’re not about any given technology or process or deliverable.  It’s not about ‘web.’  It’s not about ‘digital.’  It’s about generating an impact or getting a desired result. Only the effective will survive, so most of my job revolves around making sure we keep our eye on that ball and not devolve into being ‘about’ the web design. Not that there’s anything wrong with that.

What is something that you did not expect or plan for regarding the trajectory Taoti Labs has taken?

We thought our TaotiLabs endeavor would be about hardware—creating devices, fit and finish, etc.  We built out a whole ‘maker space’ in our studio for the effort.  But turns out, the hardware component is just the tip of the iceberg.  Like everything else that we do, success lies within the concept.  Does the idea solve a problem or generate the desired impact?  Does it cut through the noise?  Does it move the needle for our clients?  If it does, then it’s a good and worthwhile idea, and it doesn’t really matter if the deliverable is digital, physical, or something in between.  Granted, the novelty and usefulness of some of our Lab ideas do indeed help meet those objectives.  But when we get something right, it’s not because it was a “Labs project,” per se.  It’s because it was a good idea.

What’s the most interesting thing about you that we wouldn’t learn from your resume alone?

The fact that my background is in medicine usually surprises people.  I was pretty steadfast in that career choice up until the last minute.  I’ve scrubbed in on all sorts of surgeries—from ear transplants to leg amputations, dissected an entire human body (even took my now-wife to the morgue for one of our first dates), etc. The other thing that usually raises an eyebrow is that I dated a Hooter-loving serial killer in high school.  Ericka Sifrit. Look it up. Read the book.  Or watch the show. Not exactly what I want to be remembered for, but it makes for great trivia.

What habits do you have that people would find surprising?

While I start my day stupidly early (between 2 and 3), I don’t really do nights or weekends when it comes to work.  I’m a painfully slow reader, but if I watch one episode of “How Do They Do It?” I could probably rebuild just about anything from the ground up. And I listen to Bette Midler at the gym.

Finally, if you were granted three wishes with regard to life on Capitol Hill, what would they be?