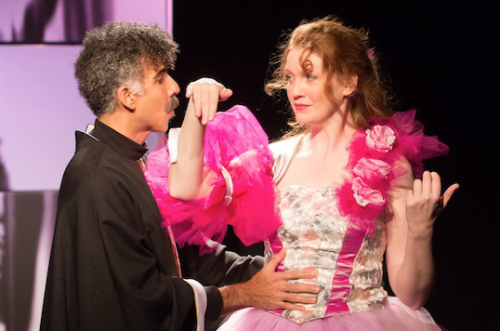 Guilt is the latest offering from Scena Theatre, now playing through February 4. Guilt, a lurid story of abuse, betrayal and torture told in a bare-bones stage, dominated only by a towering rotating sculpture that looks like a cross between a Rorschach ink blot and an Exquisite Corpse, is a reimagining of the events that transpired at Loudun, France in the 17th Century.

The play is a modern attempt at understanding the passions, double-crossings and lucubrations that led to the torture and execution of a priest called Urbain Grandier, who stood accused of demonically possessing an entire convent. It is also an exploration of the actual, feasible carnal pathways that led to the mass hysteria and the invented allegations of said demonic possession. It is also a departure from the original story, choosing to pare down characters as it interprets larger themes.

Throughout the two-hour play, we are treated to powerful performances by the cast. The energy starts out high and playful as we are introduced to Grandier, played by Oscar Ceville. Grandier tricks the magistrate DeBrou (Ron Litman) into trusting him around DeBrou’s nubile daughter, Brigitte (Danielle Davy). Grandier, in turn, callously seduces Brigitte and then shuns her, causing Brigitte to go from being doll-like and innocent in pinks and tulle to transforming into a shivering and sullied dove in beautiful, sad grays. Brigitte as played by Davy, with her jewelry-box ballerina movements that degrade into a pregnancy shuffle and finally into a restricted nun’s gait, together with the excellent costuming choices made by Eva Petric, shine throughout the production.

Despite trying to stand up for herself and clarify her situation, Brigitte cannot allay her father’s fears nor the wagging tongues that are talking about her tarnished reputation. As DeBrou seeks revenge, Soeur Jeanne, the abbess of the Ursuline convent in town, reveals in lascivious detail her ardor for Priest Urbain. Nanna Ingvarsson’s Soeur Jeanne vibrates at a high frequency –veering between lunacy and lust. Her task –lending credibility to the demonic possession and controlling Brigitte and, by extension, the whole convent– is not easy, but Ingvarsson’s energy and verve make it look almost fun.

By the time Surin, the priest who is a “specialist” in exorcisms, comes around (played with pitch-perfect crazy unctuousness by John Geoffrion), things move from feeling like a romp and into a dark, scary void. When the demonic accusations take center stage, and later, when Geoffrion and Ingvarsson become the awful Bontemps couple who tortues and executes Grandier, we are just as dazed as the protagonist, trying to understand how it all went so very wrong.

Strong acting and directing and an inventive use of costumes and the space at the Lab theater make this play a great piece of theater. Plan your evening around this event: At two hours without intermission, you may want to hold off on drinking a lot of water before seeing Guilt. Correction: Guilt now has a 10-minute intermission.

WHAT: Guilt, by John Shand and directed by Robert McNamara

WHEN: Thursdays through Sundays until February 4th. For tickets, click here.