ElectionCycle Puts a Political Spin on New Studio in NE

We’d like to give a big welcome to our newest writer, Katherine Priddy. Kate recently obtained an M.A. from American University in interactive journalism and she did her capstone project on the history of H Street NE. Check out her project (and an interview with yours truly)! We look forward to reading more posts from Kate! –María Helena Carey 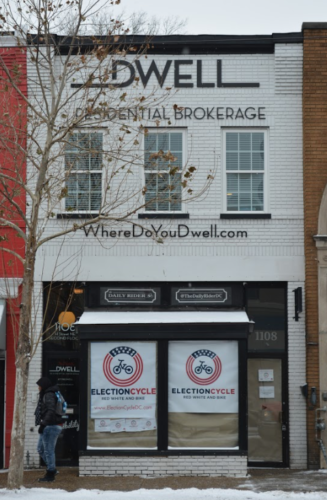 Photo of ElectionCycle by Katherine Priddy

H Street NE will witness another beginning on Inauguration Day this year. Spinning studio ElectionCycle will hold its grand opening at 1108 H Street NE on January 20.

Washington, DC is pretty well-known as a biking city, making Bicycling.com’s top ten list of most bike-friendly cities in 2016. Whether residents are braving rush hour on two wheels or leisurely pedaling along Rock Creek Park, the District –for better or worse– is familiar with bicyclists. Therefore, it’s not surprising that spin studios are popping up all over town. Who wants to be outside in this crazy weather?

The new studio, described as a “boutique luxury indoor spin studio” on its website, is sandwiched between Hillman & Son Barbershop and Copycat Co. and will replace The Daily Rider, which outgrew the space, will open its new location this summer in the 600 block of H Street.

The studio’s theme ties national politics into its branding and overall vibe. Under its logo incorporating the American flag’s stars and stripes, are the words “Red White and Bike.” The tagline, “Finally a party you can be proud of!” is repeated across the studio’s website and social media.

Andrew Esquer, the studio manager and lead Spin instructor at ElectionCycle, used to live near H Street and remembers traveling at least 15 to 20 minutes to a gym in Northwest. While current residents in the area have yoga, pilates, CrossFit, and even a dance studio to choose from, there was no spinning. “This is our way of integrating more fitness into that side of town,” he said.

Esquer, who fell in love with spinning after a hamstring injury two years ago, said owner Candice Geller wanted to bring a “fun and affordable boutique studio in the city” where “everyone is welcome and no one is left out.”

“I think everywhere you go in DC, there is always political talk so there will probably be some of that at first but we just want to make sure that everybody knows that they are welcome,” said Esquer. ElectionCycle has various classes on its schedule with names, like “Political Party,” “Runoff Election,” and “Core Value.” Esquer said Geller wanted to “spice it up” with rotating classes that focus on abs, stretching, and offer bootcamp-style workouts.

Most feedback has been positive, Esquer said. However he commented on more negative reactions: “I don’t think you can grow if you don’t have that positive or negative feedback. But at the same time, we encourage those with any negative feedback to come check out our studio before they place any type of judgment… At the end of the day, our studio is a party. We want the classes to be fun… [and] make everyone feel that they’re a part of something special.”

Each class is capped at 25 people, according to the website, and classes are offered seven days a week beginning at 6:00 a.m. Esquer said although special plans are still in the works for the 2018 elections, you can sign up to join the party on January 20th to celebrate the grand opening and get your complimentary champagne toast.

WHY: Because it’s fun to stay fit, Washington style!