Vicuña and the American Epilogue: Review

Vicuña and the American Epilogue is the newest production by Mosaic Theatre Company. It’s now playing with a brand-new epilogue at the Atlas Performing Arts Center, and it is going to rattle you. You will want to laugh at the brilliant lines and the great comedic timing of the ensemble, but it’ll feel hollow at times. The casting for Vicuña is spot-on, and the energy that develops between the players keeps you riveted– no easy feat for a play that runs for over 2 hours with a 15-minute intermission. 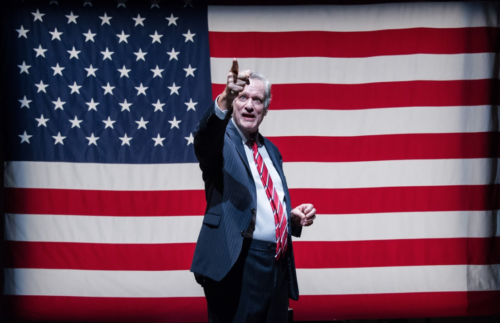 As an audience member, I became aware of how mirthless my laughter was. The play feels “too soon” and yet, “not soon enough”– as if maybe by watching it, we could turn back time and change our reality. The epilogue, while not as fun as the play, is an apt metaphor for all our feelings of one year ago. For many of us, the last election felt like a death, and the last act in the play addresses them as a worst-case scenario dystopia.

Despite the fact that the cast is not exactly true to life – it is, after all, a parody– this imitation of life is spot on. John De Lancie’s Trumpish Kurt Seaman –a name that elicited middle school giggles every time the cast said it with a straight face– was mesmerizing. He is charming like most of us imagine Trump to be, but De Lancie’s smooth baritone and inflections lend Seaman even more charm, credibility and venom. You see the power of persuasion at play from the start, as Anselm (played by Brian George) agrees to make the eponymous vicuña suit in an impossible amount of time, leaving other clients in the lurch, and agreeing to make something exquisite for a man who’s most comfortably clothed in hubris and his own ego.  You can see the hypnotic Trump effect that Scott Adams wrote about in a recent column as Seaman lures Amir (played by Haaz Sleiman) into thinking they can have a serious conversation about immigration. He is a monster, but a very alluring one. You can’t stay away.

(Aside: As a fan of My Little Pony: Friendship is Magic, it was wonderful to see De Lancie –who voices the character of Discord– channel him on the stage. Discord delights in causing chaos and confusion, and he is only disarmed and neutralized by pure kindness. And they say children’s shows aren’t deep…)

Srilanka Seaman’s confident and naïve idealism is interpreted capably by Laura Harris. She, too, portrays a more delicately nuanced character than her real-life counterpart. We see the struggle between Srilanka’s essential goodness and the love for her father. We see her decimate the vodka, and we fret about what will happen every time she slides a hand into her expensive tote to check one of her two phones. What did he do this time? It’s a question that hasn’t gotten old, and it’s brought to life beautifully on the stage.

Kimberly Schraf’s Kitty Finch-Gibbon is… well, she’s delightful. Her portrayal of a desperate GOP bigwig trying to close Pandora’s box is hilarious, annoyingly well-coiffed, deliciously smug. She dazzles us with her impeccable delivery from the start, and brings humor and humanity to the Republican establishment.

Brian George’s Anselm, a character who wishes to stay away from the trouble brewing inside his own atelier even as he knows that he cannot stay silent, is the anchor that gives this story so much gravity and heart. Together with Haaz Sleiman’s Amir, they bring the seriousness and the magnitude of what is happening and what will happen to a human scale.

Mosaic Theater keeps giving us exciting and challenging pieces and this one is no different.

WHEN: Playing now through December 3, 2017. For tickets, visit http://www.mosaictheater.org/copy-of-order-tickets