The Old and Improved Kenny’s

For several decades, Kenny’s BBQ has stood at the corner of 8th Street and Maryland Avenue NE, wafting really good smells all around one of the Hill’s busiest intersections. Kenny’s has always had good food and large portions for the price– although in our personal experience, sometimes the meats were a bit on the dry side and the sides were hit-or-miss. However, it was always good to see the red-painted façade and the familiar pig sign anchoring a part of the Hill that didn’t have much else going on. Unless, of course, you count that time President Obama had lunch at Kenny’s with several dads. 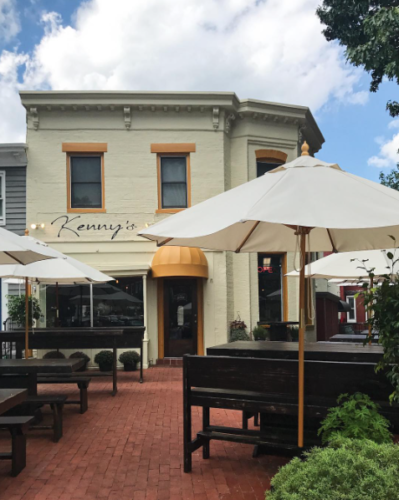 Kenny’s Smokehouse. Photo by Maria Helena Carey, via The Hill is Home’s Instagram

But some recent changes piqued our interest, and we returned for another try, finding a new owner and refreshed look and taste. The color of the façade changed in August and the longstanding pig was put away for good. Along with the new dark wood benches and spiffy new umbrellas, an updated menu and set of recipes have brought a noticeable change in Kenny’s Smokehouse.

The new manager, Aaron Jo, has been working tirelessly –and I do mean *tirelessly*, as he has not taken a single day off since he took over Kenny’s back in May– making improvements to the menu; changing the décor; making quality controls and updating the recipes that came with the restaurant.

According to one Yelp reviewer, Austin G., Kenny’s has been “hipsterized.”Austin’s assessment of the décor and the hipsterization wouldn’t be too far off: Before moving to Capitol Hill to reopen Kenny’s as his personal project, Aaron spent time in New York, opening coffeeshops and making them both cool and cozy, so he knows a thing or two about curb appeal. And the new decor is both cool and cozy: Water fixtures made into paper towel stands are placed helpfully on every table, ready to get the grease off your hands. Industrial trays hold your food and allow for more reuse and recycle. A window niche has a neat old typewriter; another niche for two has a painting propped up just so. The wood tables are stained with a homey, chic dark stain. Maybe you’ll eat some good barbecue and write an odd Southern parable after dinner.

However, the fact still remains that Kenny’s had always been a safety-type restaurant: The kind where the food tastes ok but which was never a top destination in your mind because of that time where the rice was burnt or the other time when the chicken was dry. Now, under Aaron Jo’s management, time has been spent rebuilding and perfecting the recipes that were passed down through the years the restaurant has been open. In the four or so times I’ve returned since meeting Aaron and being reintroduced to Kenny’s, both the meats and the sides have been executed well and consistently. The brisket, which is my children’s new favorite, is smoky and has a perfectly crunchy thin crust, with just the right amount of fat. The ribs are at once fall-off-the-bone and yet not overdone: It’s satisfying to bite into them. The pulled pork is flavorful and moist: it can stand on its own and dance sauce-free on your tastebuds. I asked Nicky, one of the long-time workers at Kenny’s, what she thought of the change in the food –whether it was for the better– and she just gave me a dreamy smile followed by a vigorous nod. No words necessary.

The sides need their own paragraph: Collard greens you want to eat with bare fingers because they are satisfying. Briny, al dente without being too crunchy and therefore not slimy, and with a great aroma, they are darn good collard greens. A crunchy broccoli salad with pepper flakes that has both flavor and a little heat, and of which our former FLOTUS would definitely approve. Good coleslaw –not too creamy, not too sweet– a great side to go with all that meat. The macaroni and cheese was sticky but not dry, with plenty of gooey cheese. Jo tells me that there will be more vegetarian-friendly sides coming soon. There are also craft beers, which definitely means Kenny’s has become more hip than not.

There are several sauces on a platform close to the register so you can add a little regional dip to your meats. My family liked the mustard-based Carolina sauce best, but you should try them all just in case.

WHAT: Kenny’s Smokehouse, now with 100% more hipness and revamped recipes

WHERE: 732 Maryland Avenue NE, at the NW corner of Maryland and 8th NE.

WHY: Because the food is SO GOOD and it’s great to see a longtime mainstay get updated without losing its character.

One response to “The Old and Improved Kenny’s”