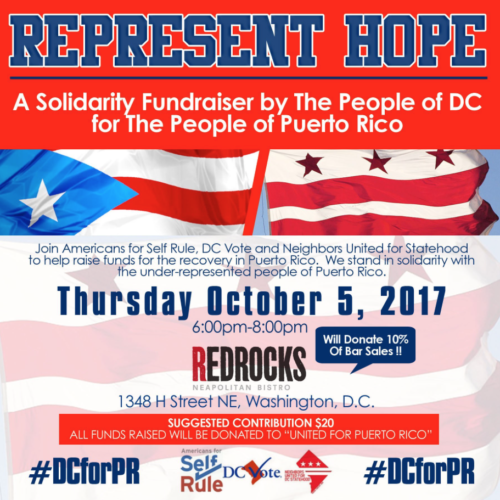 So, thank goodness that even though Hurricane Maria devastated Puerto Rico, it wasn’t a “real” tragedy like Katrina. Anyway, the devastation of Puerto Rico is a humanitarian crisis that has left the island largely without electricity or running water. Most people would agree that Puerto Rico is suffering, and some would go so far as to say that despite being an American territory, its second-class status has made aid efforts much slower. Then again, making assumptions as to what people think is good, fair, noble, just, etc., is partly why we are divided and angry these days, right?

You need to know about this fundraiser:

Represent Hope: Join Neighbors United for DC Statehood, Americans for Self-Rule and DC Vote on Thursday October 5, from 6-8 p.m. at RedRocks on H Street 1348 H Street NE, for a solidarity fundraiser by the people of DC for the people of Puerto Rico.

In addition to a suggested $20 contribution to the United for Puerto Rico fund, RedRocks will donate 10% of its bar sales for the night.

What: A Solidarity Fundraiser for Puerto Rico #DCforPR

Why: Because you want to help Puerto Rico/because you have to do…. I dunno, something?