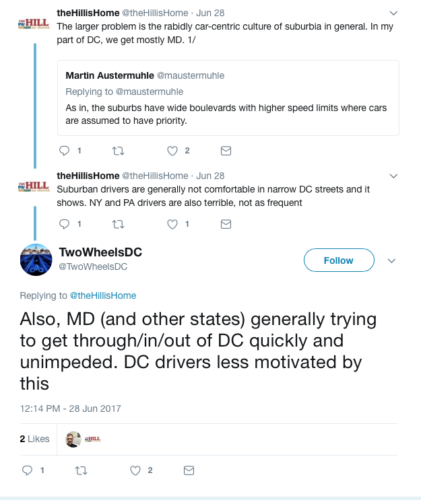 Recently, WAMU reporter Martin Austermuhle shared via Twitter a thought-provoking email he’d received. A reader took exception to Austermuhle’s (and, frankly, a lot of local Twitter’s) derision of Maryland drivers. The reader, herself a Maryland resident (and driver), felt that complaining about Maryland drivers in DC was a racist act: singling out former residents of DC who have since moved to Prince George’s County and shaming them for driving in DC. Austermuhle went on to analyze what it meant to him to call out bad driving and what this epithet meant.

When I decided to share Austermule’s thread under THIH’s Twitter, I did so because our neighborhood is a very busy access and egress point for commuters who do not live in the District. We have several streets that see a heavy daily commuter flow:

All of these streets hold a large amount of day traffic, but they are also resident thoroughfares. We all have to cross at least one of these intersections to take kids to school, to shop for groceries, to go to work, or to walk our pets.

Several readers weighed in on Twitter. Their opinions help draw attention to the fact that our neighborhood has to deal not just with a heavy flow of traffic, but also with a heavy dose of indifference from transit authorities. Our neighborhood is large and provides an access point to people who do not live in the District, but should residents handle this in what could be considered a xenophobic manner? Is calling out bad drivers or rude drivers as a whole, “Maryland Drivers” comic relief, or is it insulting? What about Virginia Drivers? Why do they not come with their own reputation, let alone their own Twitter account? (For those of you who haven’t seen it, the twitter account @MD_Driver_in_DC parodies some of the more egregious behaviors of non-District residents on a regular basis.

We would love to hear more from you all: What are your experiences with commuter traffic? What kinds of solutions would you like to hear, or problems addressed? Do you agree or disagree with the points raised? Share with us!