Most of us on the Hill have noticed the shotgun house that, for many years, stood at 1229 E Street SE, across from the Watkins field. Boarded-up windows and peeling siding showed that its best years were long gone. When the property – including the large open area fronting Pennsylvania Avenue behind it – were marked for redevelopment, there was some hope that this house could be reborn.

Fortunately, the developers, GSA, allowed the Historical Preservation Office and its archaeologists, to thoroughly document the property before excavation begins.

On Wednesday June 21st, the archaeologists presented their preliminary findings to a large and rapt audience of members of the Capitol Hill Restoration Society at the Hill Center. Led by Ruth Trocolli (pic), city archaeologist, her team took the audience through the various aspects of the project and their findings.

Their talk was titled “Coopers, Peddlers, Bricklayers: Telling the Story of a Working-Class Property Through Public Archaeology in Capitol Hill.” During the discussion, they covered all aspects of the project, such as an explanation of community-based archaeology, knowledge gleaned from the historical record, and finally, the excavation itself.

While most of us think of archaeology, we think of large-scale excavations mounted by universities, usually in distant lands, or rescue work done by contract archaeologists before the bulldozers show up. This project was quite different. While it was led by D.C.’s city archaeologist, and some work was performed by city contractors, the bulk was done by volunteers, either university students interested in honing their skills, but also by local residents intrigued by the prospect of learning more about their neighborhood. The outreach was a very important component of this project, both by having frequent open houses at the site itself, but also by telling about their work at meetings across the city. 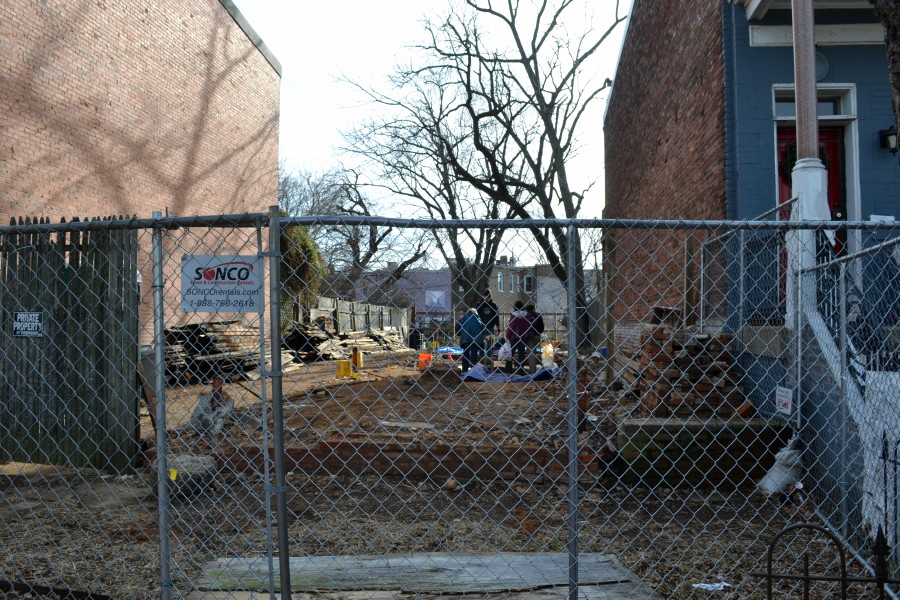 The historical record of the site is surprisingly straightforward. The house was built about 1850 by John Biegler (or Briegler) He did not live there, but rented it out. In 1853, Biegler sold it to Ernst August Tungel, a peddler/huckster from Germany. Tengel eventually willed the property to his wife’s niece, who first rented it to John Herke and his family. Herke, a barrel-maker working at the local brewery, later went on a month-long bender that ended with him trashing the furniture and winding up in St. Elizabeths. A few years later, the niece sold the property to the Hartleys, who owned the property until the mid-20th Century.

The big question that this raised was: Why would a German-born peddler build a house in the classic southern vernacular style of a shotgun house? And, second, is there evidence of Herke’s bender? 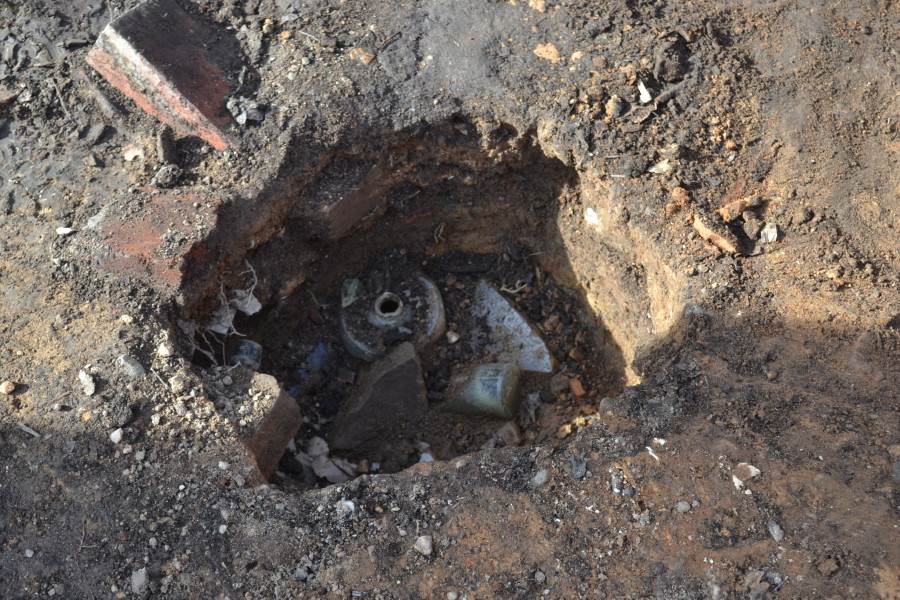 The view into a test pit. This one turned out to be quite successful (RSP)

The next step was to do the field investigation. This started with a series of test pits at regular intervals across the property, which showed the stratigraphy they were to encounter, then a series of trenches covering much of the property. Most surprising was the cellar they found – a 5 foot deep trench that extended across the back of the house, and that had been eventually filled in with a whole lot of detritus, including a surprising number of intact bottles. 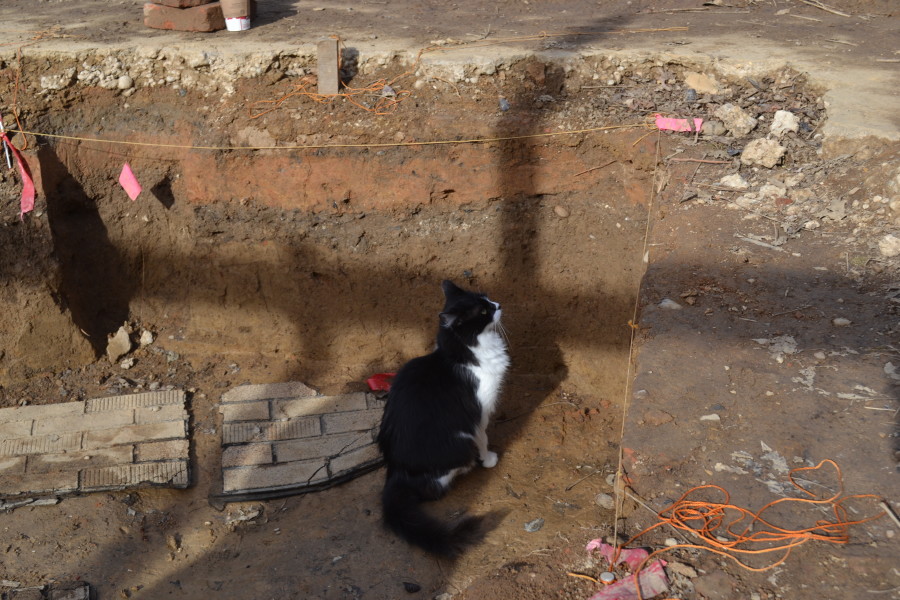 Other than that, they found many items related to Germany in one way or another, keeping in line with the heritage of many of those that had lived there, as well as a number of toys and parts of toys, particularly lots of marbles. What they did not find were any items with religious significance. There was even one layer they called a “destruction layer” where large amounts of crockery, much of it mendable, was found. The dating thereof corresponds with the infamous Herke bender, so once the items are all fully cleaned and dated, this may be proven. 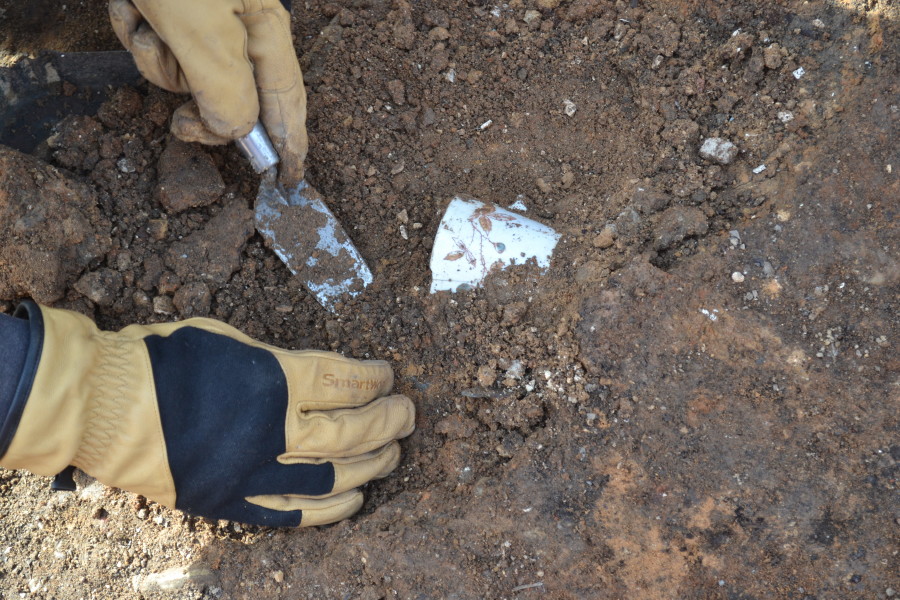 What was quite clear was that this was very much still a work in progress. While the site has been excavated as much as the team was able, there is still much work to do with the items that were found onsite. Over the next few years, the archaeologists hope to publish a complete record of the house. They are still looking for people to help with this task. If you are interested or know someone who is, feel free to contact them. 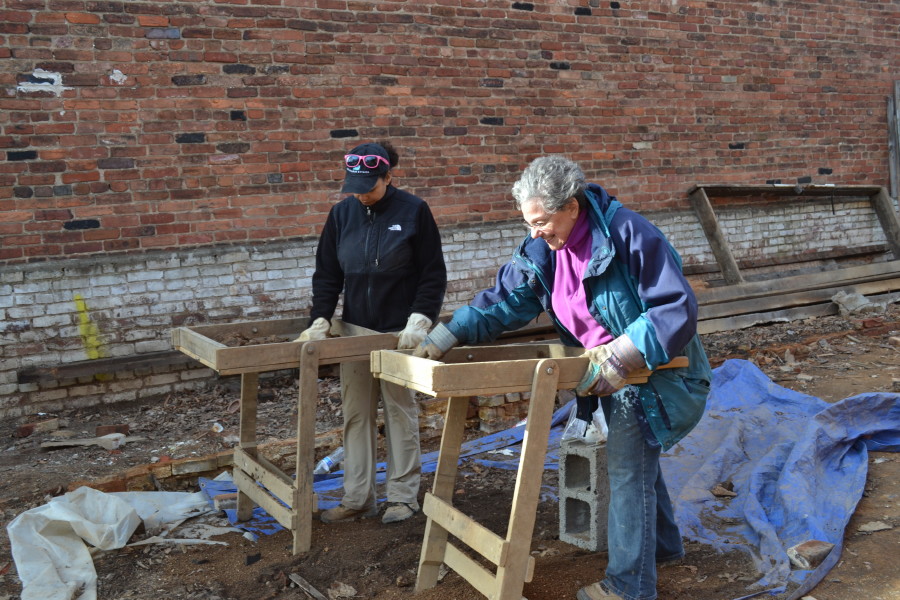 All soil excavated was pushed through a sieve to ensure that even the smallest artifacts were not overlooked. (RSP)

One response to “Lost Capitol Hill: The Shotgun House on E Street”