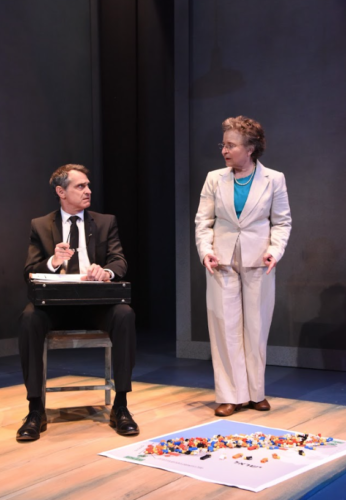 (L to R) Matthew Boston as Izakov and Sarah Marshall as Seinfield in Ulysses on Bottles at
Mosaic Theater Company of DC, May 18-June 11, 2017. Photo by Stan Barouh.

“Ulysses on Bottles,” by Israeli playwright Gilad Evron, at Mosaic Theater Company through June 11, 2017, is not perfect, but it’s mind-blowing, harrowing and uncomfortable. At turns, it’s also disconcertingly funny. The play and its staging are a perfect fit for a theater company that delights in bringing awareness to its audience by the cold-water bucketfuls.

Evron’s play, translated into luminous and vivid English by Evan Fallenberg, is a hard one to watch. It confronts us with a terrible secret in plain sight and our own ignorance of the subject: The Gaza blockade and the subpar conditions of more than two million Palestinian people is something Israelis live with, on a daily basis. It’s a tough mirror to look into, as there is more than one deplorable situation in America where silence, in the words of Martin Luther King, Jr., is betrayal.

The story of Ulysses, a jailed man obsessed with teaching Russian literature to the Palestinians in Gaza is paralleled with that of Saul Izakov, his defense attorney. Although Izakov is well aware of the situation–after all, he also works for Seinfeld (played by Sarah Marshall), an Israeli government employee who is engaging Izakov’s services to ensure that there are no human rights violations on the government’s part– he actively chooses to ignore the magnitude of the situation.

Izakov, solidly and angstily played by Matthew Boston, is an avoider. He avoids thinking about his silly wife, Eden, who requests that he embarrass himself for a disabled children’s benefit party. Eden may also be having an affair with Horesh, an ambitious and more junior attorney at Izakov’s firm. As for Izakov, he is trying to go through the motions but he clearly is not ready to answer the larger questions. He’s not much of a reader, you see.

Shepherded by Izakov’s avoidance, we are left to explore the merits of committing to a vision to its final consequences with the verve and the passion of Ulysses, as played by Michael Kevin Darnall. Ulysses – maybe so named because of his endless and fateful journey– is a principled idealist. He wants to bring the beauty and despair of Tolstoy and Dostoevsky to the Palestinians in Gaza. He wants to help them think and nourish themselves from the inside. He’s also possibly suicidal. Sarah Marshall’s Seinfeld brings humanity and doubt to a highly literate government official whose dual role is to educate the audience –and Izakov– and to provide Ulysses’s foil: Someone who can come toe-to-toe with every literary allusion thrown at her, but who also bears the burden of knowledge and of conscience. She knows what she’s doing, just like him, and she’s doing it anyway.

The play –a series of scenes with no intermission– weaves chronologically-linked vignettes. There is a fine line between abstract and concrete, and this line is maintained best in the scenes where Izakov talks to Seinfeld and Ulysses, as well as when Seinfeld and Ulysses share the stage. When reality crashes in with Eden and Horesh, the flow is disrupted despite the capable acting of the ensemble.

The very bare but cleverly screened set design by Frida Shoham is a three-dimensional allegory to the tangled webs and half-truths on display. You can see characters emerge and disappear in the gauzy confines of the set. They may be hidden, but they are not gone. It’s that suspension of disbelief that pervades our daily lives that allows us to go on and not collapse in a heap when we think of the atrocities that happen just down the street or farther down the beach from where we live.

WHAT: Ulysses on Bottles, a play by Gilad Evron