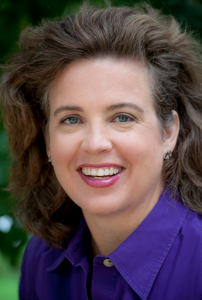 The following went out as an email to Denise Krepp’s constituents this morning. We have shared it with you, our readers, with Krepp’s permission, as the subject matter is relevant not just to her Single Member District but to the whole of the District of Columbia– and the country in general. Edited for clarity and to insert pertinent URLs for further reading. –María Helena Carey

Last month, in my role as ANC Commissioner, I sent a letter to Attorney General Sessions asking that he investigate why Tamyra Jarvis, the warden at the Federal Bureau of Prisons facility in Coleman, Florida was awarded multiple bonuses. I shared the letter with Chairman Chaffetz and he is now asking the same questions.  See attached documents:  Chaffetz letter to FBI Chaffetz letter to FBP. (Denise’s letter is below. Click on the JPG to enlarge.)
Antwon Pitt, the individual convicted of raping one of my constituents, had been a prisoner at Coleman. During this period, he repeatedly threatened to sexually assault Coleman guards. The warden knew about these threats and the FBI was asked to investigate. Nothing happened and Mr. Pitt was released and subsequently raped my neighbor.

Sadly, Mr. Pitt wasn’t the only prisoner who threatened to sexually assault Coleman employees. Many others did and yet the warden refused to address the situation. Her failure to act resulted in a class action lawsuit against her which was settled earlier this year for $20 million dollars.

I shared my letter with Chairman Chaffetz because this issue is something his committee should be investigating. Instead of overturning DC laws, he should be asking why wardens who make decisions that negatively impact the lives of DC residents receive bonuses.

In my view, the Coleman warden should have been fired and it’s my hope that Chairman Chaffetz’s oversight letters​ trigger much needed reform. 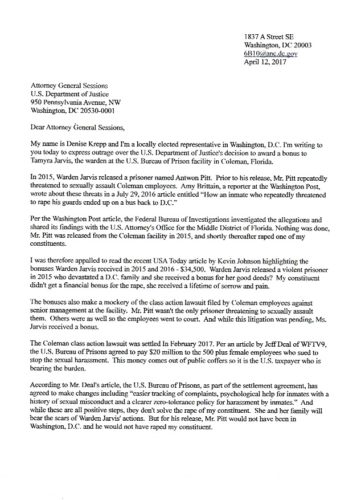 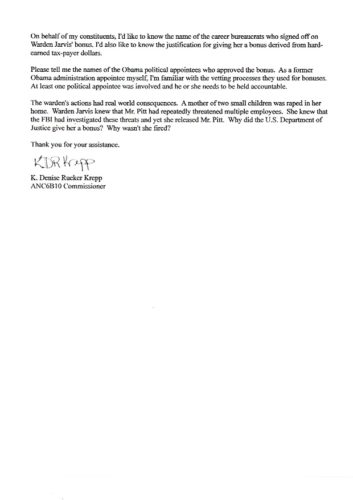