Leave Alpha Rolls to the dogs who do them correctly

Well-meaning humans can make some unfortunate choices where behavior modification is concerned. 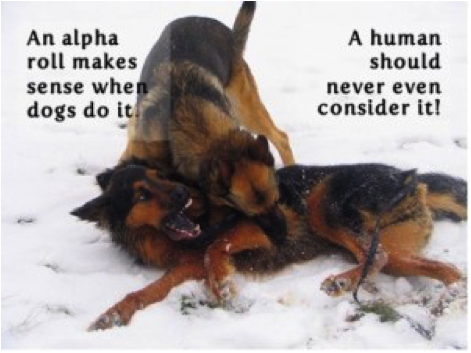 One day in Lincoln Park, I witnessed a well-meaning dog person pinning his puppy to the ground, his hand around her neck. He used an alpha roll in an effort to teach his dog to not jump on other dogs in the park.

The puppy screamed so loudly and for so long, that I broke off a conversation I was having with a client, and sprinted across the park. I was expecting to have to do first aid on an injured animal.

Instead, I found this man, holding his four month old down, looking at her with thunder in his eyes.

Can you see the error in his logic?

First and foremost, the alpha roll technique is relatively new, having been popularized in the mid-70s, and since then, it has been widely rejected as ineffective and counter-productive.

Centuries of scientific observation support the fact that punishment does not last in an animal’s state of mind (think of all the tragically abused dogs that stick by their humans when they really shouldn’t) and that, for the average dog, intermittent positive reinforcement is the only effective training method.

I’m sure the gentleman in question wanted to keep his dog safe, but teaching her to be afraid of his hands is going to reap the exact opposite effect. In fact, she will likely learn never to come when called, which will earn her even more negative treatment.

In addition, asking a puppy to not jump up on other dogs is like asking a child to learn how to be a dog. It makes no sense.

In a future column, I’ll be discussing how to train for bite inhibition and polite behavior from other dogs much more effectively than humans pretending to be dogs.

So, leave the alpha rolls to the safe, big dogs and rely more effectively on humane training techniques.

Instead, try shaping behavior with appropriate rewards and consistent boundaries. The process will be more fun and the results will be more effective!