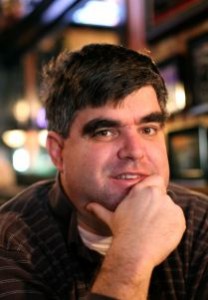 Tim Krepp wants you to do your duty. Photo by María Helena Carey

I’ll be honest: It’s not critical that you vote this year. If you were gonna take a year off, here is your chance. There’s not the slightest bit of mystery for the results of any of these races. However, democracy is as much about process as is it about results. So, suck it up; do your duty; go vote. For those of you who did your homework, you can close this tab and get back to whatever else you were doing on the internet today. No, not THAT. Don’t be gross.

For those of you who were not paying attention, here’s your 2016 Lazy Voter’s Guide.

Presidential: Normally, I take great pride in my studied indifference to the top of the ticket. We live in DC. It. Does. Not. Matter. The Democratic party takes us for granted, and I think y’all like it that way. But this year is different and you don’t need me to tell you why. I’ll be the first to admit that Hillary isn’t my favorite. But she’s like ordering a ham sandwich and getting turkey. Slather some mustard on that thing and get back to work. The alternative is ordering a ham sandwich and getting stabbed in the eye, while still not getting the ham sandwich you wanted. So as much as I’d LIKE to encourage you to vote for a third party or whatever to try to somehow send a message to the Democratic party not to take us for granted, this year we need to run up the vote count. We’ll worry about the other stuff next cycle.

DC Delegate to the House of Representatives: YOU PEOPLE HAD YOUR CHANCE!!! Don’t come crying to me now.

Shadow Senator and Representatives: I encourage you to take your time, research the candidates, and read up on the responsibilities of these very important positions… sorry. I couldn’t keep a straight face while typing that. Come on. These aren’t real things.

DC Council: Ward 6 isn’t up this year, but we have an at-large race. You get two votes. Use them on Robert White and David Grosso. They do not suck, which may be the first time I can ever remember that the two likely at-large winners do not. Good work, primary voters.

At-Large Member of the State Board of Education: As soon as someone can tell me what the “State Board of Education” does, I’ll figure out who to vote for. Honestly, I’ve tried for years to figure it out and still don’t get it. But Mary Lord is a good person and hasn’t broken anything as the incumbent. (N.B.: For those of you who want to know more about the DCSBOE and what it does, take a look at their Frequently Asked Questions.–MHC)

Advisory Neighborhood Commission: This will depend on where you live, and there are far too many for me to chime in on them. But I will give two recommendations:

Advisory Referendum on the State of New Columbia Admission Act Resolution of 2016: My god, we can manage to screw up even the most basic of things, can’t we? “New Columbia?” Could we GET a worse name (probably, yes)? Just vote for it. It’s an imperfect vehicle but we need a strong Yes vote as we lurch slowly and cumbersomely forward in our demand for the most basic of civil rights in this so called representative democracy.

So that’s it. Go vote and let’s never speak of this election ever again.