Memorial to be Held for Ed Copenhaver, Mentor at Frager’s and in the Community 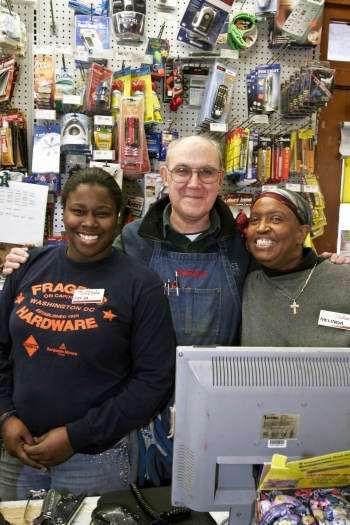 When you walk into Frager’s Hardware you can count on great service with an attitude to match. Work ethic like that doesn’t just happen. Ed Copenhaver, a former owner of Frager’s who died June 27th, was the leader up front and behind the scenes. The 73-year old long-time Hill resident modeled such helpfulness and warmth that he touched  the lives of employees and customers alike. A memorial for Ed will be held tomorrow, July 9, from 4:30 to 6:30 p.m. in the chapel at Congressional Cemetery.

Ed was my neighbor for 18 years and he could always be counted on for a smile and kind  word. Yes, that’s trite but it’s irrefutably true.  Walking to work or walking his dog, he greeted my children by name and often fielded my own house-related questions from his stoop just down from mine on 14th Street. I watched him interact with his employees and heard them toast and roast him at his retirement party in 2012 at the Hill Center. The memorial service is sure to be an outpouring of affection and respects from across the community. As a dog lover who moved to Washington after serving in the Navy during the Vietnam War, the Congressional Cemetery seems fitting.

Ed was known as a listener and problem solver. After his retirement, I was baffled to see him in the store but that’s just who Ed was, so there he was (with an hourly wage, he said) listening and problem-solving. Over the years he had hired and trained many neighborhood kids and I hoped my children would have a chance to be coached and cared for as he was known for doing. When you love your job like that, it’s contagious.

For me, his gentle delivery of bad news was everything, especially in the midst of frustration that old-house owners know so well. I needed to repair the framing on my porch and it was clear there was wood rot from leaks in its roof. I pleaded for some magic fix that didn’t include replacing boards or hiring someone. He listened to me whine but he didn’t troubleshoot like he taught his staff to do. Ed looked me in the eye and said “Really, painting it or trying to put some other product on it isn’t going to do a lick of good. Save your money and get the porch fixed. Do the right thing.”

We will miss you, Ed.