The Beauty of a Storm: Pericles at Folger Through Dec. 20 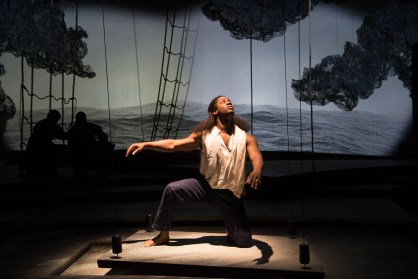 Do you sit by your window and marvel as a thunderstorm moves by, feeling powerless against Mother Nature and the electric energy sizzling through the sky? If that’s the sort of thing that moves you–or if you just like inventive theatre–make plans now to see Pericles at the Folger Library and Theatre before it closes December 20. You can buy tickets here.

The production stars Wayne T. Carr, a DC native, as Pericles, the Prince of Tyre, whose body, faith and spirit are tested through the decades and on the extraordinary journey through love, loss and ultimately redemption and reconciliation. Director Joseph Haj from the Oregon Shakespeare Festival leads his ensemble through a story that incorporates both remarkable visual projections and live music.

Imagine you’re in the midst of a clamoring storm on the brutal sea and you’ve got the image of what it’s like to sit mesmerized in audience. The visual feast and drama of the projections are the creations of designers Francesca Talenti Jan Chambers, Raquel Barreto, Rui Rita and Amadon Jaeger.

In Shakespeare’s tale of adventure, love and persistence the prince finds love in Thaisa (played charmingly by Brook Parks) and then loses her and his daughter Marina during his journey through time and the coasts of Phoenicia, Greece and Turkey. Jennie Greenberry enlivens the stage not only with her lithe performance of Marina, a young woman tossed about through life, but especially so as the vocal stand-out of the side-stage musical ensemble, featuring a cello, piano and drums, that brings a bluegrass feel to the stage at various intervals. Armando Duran, as Gower, who also performs with the band, is our calming narrative guide through the tumultuous story. Carr, as Pericles, honestly depicts the grief of destroyed man at the end of his life – and as he springs back to life after discovering Marina and Thaisa are still alive.

The Folger is proud to donate part of the proceeds of the performance’s run to the work of The Office of the United Nations High Commissioner for Refugees, which helps and protects people displaced by violence, conflict and persecution.

There is a post-show panel with the cast tonight, December 10, and an Open-Captioned performance will take place Sunday, December 13 at 2 p.m.