As I slowly make my way through the history of the Navy Yard, I have come across many firsts for that establishment – including the first proper ship to be built there.

Although the Washington Navy Yard was started to build one of the frigates that had been authorized in 1799, the end of the Quasi-War with France in 1800 obviated the need for more large ships. Thus, the first ships to be built there were smallish gunboats built in 1804. The first proper boat would not be built there until the following year.

With the war against the Barbary Pirates in full swing, it was clear that Jefferson’s small gunboats would not do. The Navy Yard was thus ordered to build an 18-gun brig. This boat was much smaller than the 74-gun monster that was originally to be built, but considerably larger than the previously-built gunboats.

On May 30, 1805, Secretary of the Navy Robert Smith sent Thomas Tingey a terse message telling him that the name of the boat currently under construction was to be “Wasp” and work proceeded well thereafter. It would, however, be not until the beginning of 1807 that the ship was completed, at which point a serious problem cropped up: There were not enough sailors in the Navy to man the new ship (as well as the Chesapeake, an older ship that was to be fitted out for action.

By May, this issue had been cleared up and the Wasp was sent to the Mediterranean via England. Her first transatlantic voyage showed her to “have many good properties, such as staunchness, stiffness, and fleetness” as her Captain, Master Commandant John Smith reported. Shortly thereafter, she continued on from England, but, arriving in Gibraltar, found orders to return straightaway back across the Atlantic – while the situation in the Mediterranean was settling down, tensions between the United States and Great Britain were rising, and all ships were needed at home. 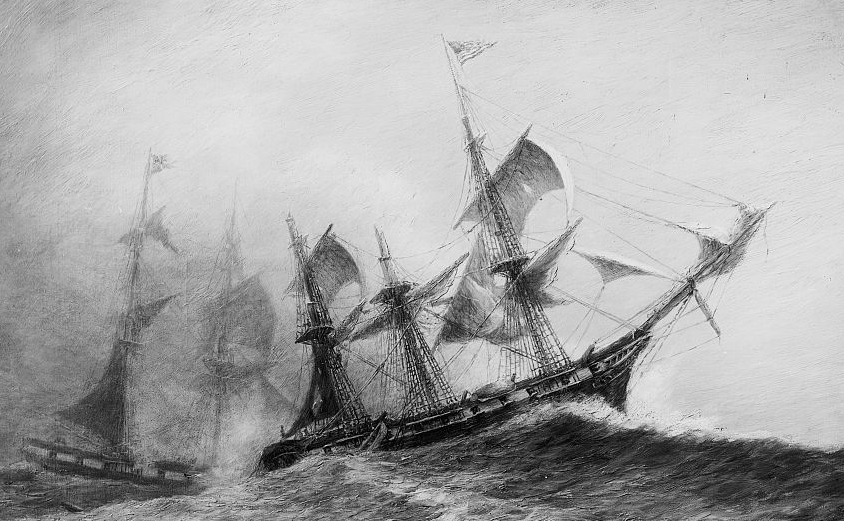 The next years were thus taken with patrolling the shores, from Maine down to South Carolina, attempting to keep all goods from both England and France from the United States. In June 1812, with the outbreak of hostilities with Britain, the Wasp set sail again under Master Commandant Jacob Jones, and in October of that year, she fought her most famous engagement.

Just a few days out from the Delaware River, the Wasp was damaged by a gale, which also had scattered a British convoy being protected by HMS Frolic. The Frolic had taken some damage, too, so when the two ships met, both were somewhat handicapped. The battle only lasted about 22 minutes, by which time the Wasp had lost most of its sails – but had managed to kill all of the Frolic’s officers, as well as about half of the crew.

The crew of the Wasp prepared to repair the Frolic, but before they could do much, another, much larger, British ship arrived – HMS Poictiers – and the victors found themselves prisoners.

While the crew were speedily returned to the US, where they were greeted with a hero’s welcome, the Wasp was commissioned into the British Navy, and as such had a fair bit of success capturing US-flagged ships. On July 23, 1814, however, the Wasp, now renamed Peacock, disappeared somewhere off the Virginia Capes, ending her short career.