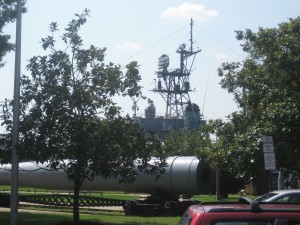 A familiar scene of the greater Capitol Hill neighborhood may soon be no more. As first reported by JDLand, the Navy is indicating plans to scrap the ex-USS Barry. The Commanding Officer of Naval Support Activity Washington, Capt. Monte Ulmer sent a letter to interested stakeholders in which he noted Barry’s “hull is in poor condition and must be removed before construction begins in October 2015 on the Frederick Douglass Memorial Bridge.”

The Barry was commissioned in 1954 and served until 1982, two years before she was brought to the Navy Yard. She supported operations off of Lebanon in 1958 and Vietnam a decade later. Her best known exploits came in 1962 when she helped enforce the quarantine of Cuba during the Cuban missile crisis. While venerable, and possessing a distinguished service record, she is not particularly unique or eligible for listing on the National Register of Historic Places. In fact, she is one of three Forrest Sherman-class destroyers remaining (fellow history nerds may remember one of the others, the ex-USS Turner Joy, from the Gulf of Tonkin incident).

The timing of the move seems to be related to the upcoming replacement of the Frederick Douglass Memorial Bridge. Generally, the Federal government requires bridges downstream of Navy facilities to accommodate warships. The current bridge has a drawbridge; adding one to the new bridge is estimated to cost an additional $140 million, plus an $100,000 per year in operating costs. The District has reportedly been in discussions with the Navy and Coast Guard to waive that requirement but to date, there has been no confirmation that has been officially waived. 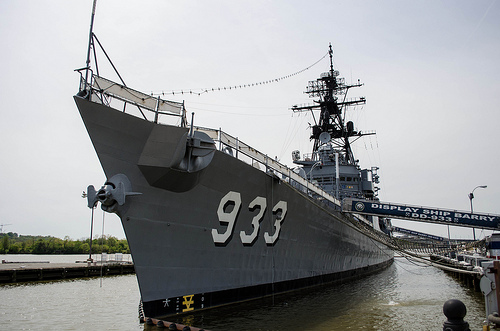 The height may not be the only issue. When the Barry was towed here in 1984, the Anacostia channel had a charted depth of 17 feet. The latest survey of the channel by the Army Corps of Engineers in 2012 indicates a minimum controlling depth of 9-11 feet at the entrance of the channel. A more limited survey of the area from the bridge to the Navy Yard in October of last year showed the Barry was afloat in just over 14 feet of water, with sufficient depth as far as the bridge. According to Corps of Engineers project manager Bob Blama, a new survey will be conducted as soon as weather conditions allow to see if this is the case for the rest of the channel, the portion from the bridge to the Potomac. If not, dredging may be required to get the Barry out.

Naval District Washington has not officially confirmed the initial report, but a press release is expected in the next few days. As yet, there is no word what, if anything, will replace the Barry, so now would be a good time to push for a giant waterslide if someone was so inclined.