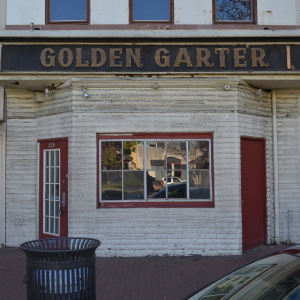 Since Hill institution Remington’s closed, and their sign was removed, an older sign proclaiming that this is the “Golden Garter” has returned to the 600 block of Pennsylvania Avenue SE. It’s a throwback to an older – and maybe even wilder – time in Hill history, and has attracted the attention of numerous writers, including John Kelly. I wanted to look at some of the earlier history of the place, and found that it has been used in a wide variety of ways over the years.

639 Pennsylvania Avenue has had a fairly turbulent history. It first crops up in 1879 as the ‘parlor’ of the Conservatory of Music. Mr. Otis Bullard had founded the school about ten years earlier, and continued to teach music until his death in 1905, when he was knocked down by a “careless bicycle rider,” according to the Washington Post. Bullard had reached the healthy old age of 89, but was no match for a floor-walker on a bike.

By this time, the location he had used for concerts had already gone through a number of different changes, being used as a paper-hangers shop, a pool hall, and undertakers. It would remain the last for a number of years, run by one Edward M. Boteler, who was known as ‘Ned’ to most of those who lived in East Washington. He had lived on Capitol Hill before the Civil War, and had become an undertaker in 1863, eventually moving to this location. He would be succeeded by his son, Edward L., however he does not seem to have been as canny a businessman as his father, being forced to declare bankruptcy in 1916. 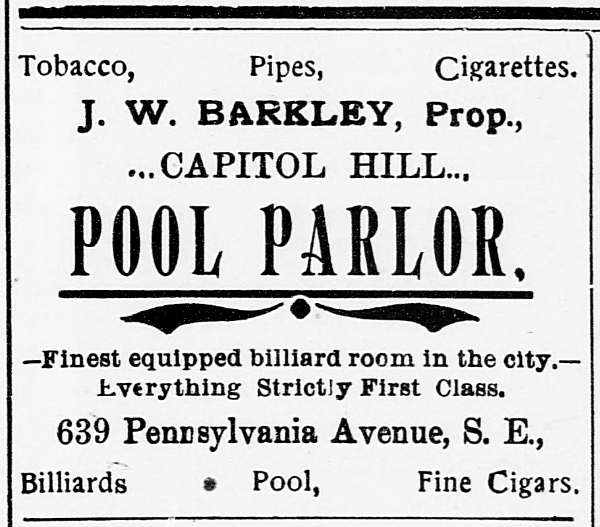 Advertisement from the February 17, 1900 issue of the Colored American. (LOC)

The next years were quiet for the building, and only after the repeal of prohibition did it return to the news. In 1934, Andrew Dorgan requested permission to open a bar there. He was given a hard time of it, as 639 was close to the schools at the corner of 7th and Pennsylvania. Nonetheless, a restaurant did open there, and throughout the Second World War, Joe Boyle’s Bar and Grill was a mecca for the hungry and thirsty. Boyle also supported a local baseball team, though his civic-mindedness did not extend to actually observing all the ration laws on the books at the time – in 1945, he found himself in trouble for improperly obtaining the food that he was serving.

Nonetheless, the bar managed to survive for another 15 years, succumbing to bankruptcy in 1961. The furnishings were auctioned off, and shortly thereafter, a new bar opened – the Roaring Twenties East. Riding a wave of nostalgia for all things Prohibition, the original Roaring Twenties on Georgia Avenue had been a success, and this was to be transplanted east of the Capitol, as well. It was, according to the Washington Star, an excellent place, with its worst aspect being that it was much too tempting a place for a newspaperman leaving the Star after a long day’s work.

Apparently, not enough Star reporters stopped by, because by 1968, the place had become the Golden Garter, and while the Roaring Twenties had “decorative” girls, according to the Star, the new place found itself looking for Go-Go dancers. The place did not last long, and in 1970, Weschler’s auction house – which had previously sold off the Roaring Twenties’s inventory – now was selling off everything from the Golden Garter – including the liquor license.

The location would go through further changes before becoming long-time Hill institution Remington’s, and now is set to become another restaurant – and a Sprint outlet.

One response to “Lost Capitol Hill: The Turbulent History of 639 Pennsylvania Avenue”