Given that it is Labor Day today, and I expect, nay hope, that my readership will drop off dramatically, I am thus going with a rerun for today’s column. It’s an episode that has intrigued me since I first saw a picture of it on Shorpy’s: The day that the Graf Zeppelin flew over the Capitol.

On October 11, 1928, the airship Graf Zeppelin took off from Friedrichshafen, in southern Germany for its first major flight. Not yet a month old, and with only five previous, short, flights under her belt, she was already attempting a flight that had previously been successful only a few times: Once by a British airship in 1919, the second four years earlier by another Zeppelin when it was being delivered to the US Navy.

The flight was not entirely trouble-free, as it was necessary for riggers to climb out on the outside of the ship to repair storm damage midway across the Atlantic. In spite of this, the captain, Hugo Eckener, delayed the landing in New Jersey a little longer by having the ship circle over the Capitol. An AP article from Washington Post, Oct 26, 1928 described the scene thus:

Washington first saluted the Graf Zeppelin at 12:21 when she approached from the east over the Capitol. As she circled above the Government buildings, sharp-eyed naval experts noticed the hole in her port stabilizer – the rent that had caused the anxiety last Saturday.

The airship dipped its nose to the Capitol and then continued west, flying over the White House, where Calvin Coolidge, like so many other Washingtonians, stopped work and stepped outside to have a look. Later that afternoon, after a total of 111 hours aloft, the passengers – including one stowaway – disembarked in Lakehurst, NJ. The crew of the Graf Zeppelin was given a ticker-tape parade in New York City and invited to the White House. 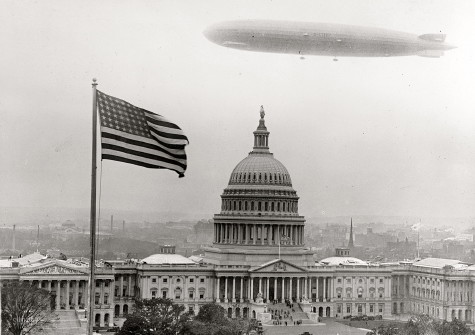 The Graf Zeppelin over the Capitol (Shorpy’s)

A year later, the Graf Zeppelin completed a round-the-world flight, and later flew to the North Pole twice, but she was mainly used for flights to and from South America. In the following years, the airship would return to the United States numerous times, and would make flights totaling over 1 million miles with no accidents – in spite of using the notoriously flammable hydrogen as its lifting gas. In short, the Graf Zeppelin was one of the most, if not the most, successful airships of all time.

On May 5, 1937, the Hindenburg burned in Lakehurst, making the future of hydrogen airships uncertain. Exactly three weeks later, Hugo Eckener returned to Capitol Hill – this time on the ground – to testify before the Senate Military Affairs Committee that the US was the only country that could use airships in war, as they were the only ones with sufficient supplies of helium. He furthermore asked that the US consider giving Germany access to helium for commercial purposes. Eckener was unsuccessful in this, and the Graf Zeppelin (which would probably not have worked with helium, anyway) was retired a few days later and was disassembled shortly after the outbreak of the Second World War.