All across DC, usually at the intersection of two avenues, lie squares and circles honoring some important figure of US history. Usually a Civil War general (with some other wars thrown in for good measure, plus a single admiral) whose name is today better known as the location of traffic jams than anything else.

On the Hill, it’s a bit different: The three squares that have been given names were given those of Abraham Lincoln and two of his famous Team of Rivals. Only Lincoln Park has managed to get a statue of the man himself on it, while Stanton Park’s statue is of someone else entirely. It is the third square we will look at today.

Secretary of State William Henry Seward was one of Abraham Lincoln’s Team of Rivals – and his most important, given that it was Seward that Lincoln beat out for the nomination to the Presidency. Seward accepted this defeat with good grace, and went on to serve not only Lincoln, but also Johnson, for their terms in office.

Along the way, Seward was attacked by members of the Lincoln assassination conspiracy, and while he was badly injured, Seward recovered. Sadly, the same could not be said for his wife, Franny, and daughter Fanny. Both died shortly after the attack, and it was said that their swift demise could be related to the shocks they had received that terrible evening.

Seward found himself without female assistance, and thus went searching for someone to take his wife and his daughter’s place. The daughter of a close friend of his fit the bill, and soon thereafter Olive Risley became his closest confidant and traveling companion – in spite of the fact that she was some 30 years younger than the now ex-Secretary of State. Unsurprisingly, tongues were set a-wagging, and Seward decided that the best way to still them was to adopt Risley.

For the next couple of years, until Seward’s death in 1872, Risley accompanied Seward everywhere, and assisted in writing a book of his travels around the world. She outlived her adoptive father by some 35 years, dying in 1908.

About 100 years after Seward’s death, the artist John Cavanaugh decided that Seward Square needed a statue to complete it. Since nobody else had done anything in that direction – not even a statue to someone else – Cavanaugh took matters in his own hand. 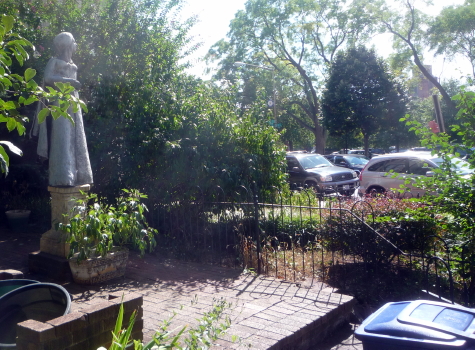 The artist, who had tried various media for sculpture before becoming enamored with the possibilities of hammered lead, set to work. Starting with a 46-foot-square piece of lead, he began hammering away. He was undaunted by the fact that he actually could find no picture of Ms. Seward to work from, so he simply worked towards what James M. Goode called an “idealized likeness of a Victorian lady.”

Years later, a picture was found – and opinion had it that it was remarkably close to what Cavanaugh had sculpted. Sadly, Cavanaugh was not there to appreciate this; he had died in 1985 of cancer, which was attributed to his work with lead.

Today, his statue – somewhat damaged – still stands at the corner of 6th Street and North Carolina Avenue, looking over towards the still statue-less park named for her adoptive father.