Could a Whole Foods Finally be on its Way to Navy Yard? 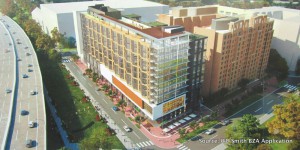 Speculation about whether and when a Whole Foods might land on or near Capitol Hill is a favorite pastime of many dedicated Hillites tired of traveling to Logan Circle or Clarendon to get their [insert favorite fresh and organic items] fix. Trader Joe’s hope and speculation is just as high. For anyone keeping score, you’ll know that all four DC Whole Foods stores and both Trader Joe’s (one existing, one under construction) stores are in Northwest.

And while I don’t begrudge a private retailer’s decision-making process for where to locate — read: lots of stats and formulas about income, density, and location convenience — I think I stand with a fairly large portion of the Southeast, Southwest, and Northeast communities in thinking It’s. About. Dang. Time. For. Some. Stores. On. Our. Side… right? 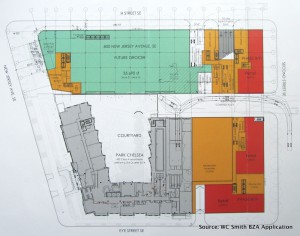 Zoom forward to this week, when ANC 6D received a Board of Zoning Adjustment application for 800 New Jersey Avenue, SE — a proposed 11-story mixed-use residential and retail building developed by WC Smith just south of the Southeast Freeway and north of the under-construction Park Chelsea apartment building in Navy Yard. What distinguishes this development from others around it is the roughly 36,000 square feet single-use retailer proposed for the ground floor — listed in the application and the drawings as a “full service grocery store,” including a 2,300 square feet “brew pub.” (Yes, apparently a brew pub is now required on every corner. Neighborhood rules.)
Now, before the rumor mill wildfire starts spreading, I have to insert the caveat that no lease has been signed yet for the space. But here are a few reasons why this building might just be — fingers tightly crossed — the location of DC’s next Whole Foods:

So, while I definitely don’t think all this means that a Whole Foods is 100% coming to the neighborhood, it’s a great sign that hey, we really might be getting close this time, and that at the very least, another residential building and grocery store of some kind is on its way through the approvals process. More to come as I hear it!
David Garber is the Advisory Neighborhood Commissioner in the Navy Yard neighborhood. Follow his up-to-the-minute updates on Facebook at www.facebook.com/votegarber and on Twitter at www.twitter.com/garberdc.

5 responses to “Could a Whole Foods Finally be on its Way to Navy Yard?”