Returning to the subject of Prohibition that I broached last week, today, we will look at how some Hill residents responded to the banning of alcohol by simply making their own. Since the ingredients are quite simple, it is unsurprising that enterprising members of society circumvented the law in this manner.

One of the great loopholes of the Volstead act that implemented prohibition was that citizens could brew 200 gallons of wine for personal use. This ensured that the value of grapes leaped up dramatically during the early years of prohibition, and people made fortunes selling them by the wagon-load in eastern cities. It also paved the way for what the jazz artist Eddie Condon called “the worst drink in the world.” Several companies, including the Vino Sano Grape Brick company sold concentrated grape juice pressed into a brick about the size of a bar of soap. Upon being put into water with the appropriate amount of yeast, water, and sugar, it would eventually turn into something that was almost, but not quite, completely unlike wine.

The incredibly unfortunate results of both of these endeavors ensured that most people simply turned to other, more handy, folks for their liquor. Although much of the booze was smuggled through Canada or France into the US, the Washington Post has numerous articles that show that there were also numerous enterprising folks on the Hill who were doing well by doing good.

One of the raids described occurred at 300 1st SE on November 7, 1924. A G. Leo Mortimer and his brother, James E. Mortimer, were arrested for owning a distillery setup capable of “turning out 40 gallons of peach brandy a day” The house “once was one of the finest residences in the city” had by then come far down in the world, in spite of its close proximity to the Capitol. Today, the house that was raided is long gone, but the location is that of the National Republican Club. 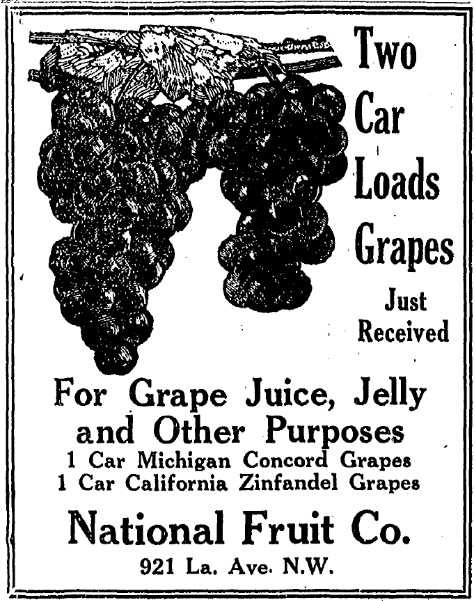 An advertisement from the September 7, 1921, Washington Post. What the ‘other purposes’ mentioned are is left as an exercise for the reader (Washington Post)

All the way across the Hill, near Congressional Cemetery, another raid occurred a few years later. In this case, the house in question was 1625 H Street SE, and not only did they find 300 gallons of “’rye’” (yes, the Post put the word in quotes, presumably because the product found had very little in common with the liquor made back in the day by George Washington), but the booze had been undergone “[a]n electric process,” which was “said to impart to bootleg liquor the mellow flavor of the aged in wood stock of pre-Volstead days.”

It consisted of an electric heater, which warmed the newly-made hootch. Furthermore, the gas and electricity needed for the production was piped and wired in such a way to circumvent the meters, so that neither company would get paid for their service. Presumably, if you are in the business of illegally producing alcohol, there is no need to deal with such small things as paying for utilities.

Three years later, production was still booming on the Hill: On Independence Day 1930, a couple of detectives and a sergeant from the 5th Precinct raided a house on 10th Street Southeast, near B street (today, that’s Independence Avenue). Inside was a 200-gallon capacity still, as well as fifty 50-gallon barrels of mash. There were, however, no distillers at work – presumably, they were out celebrating that nation’s independence. The three-paragraph article in the Washington Post the next day makes mention that the police staked out the property for some time, so it seems odd that they were unable to catch anyone in the act.