I have recently looked at some of the aspects of Prohibition on the Hill, looking at the raids of 1931, as well as the production of liquor here. That still leaves one important aspect of the alcohol trade unexplained: The sale thereof. Most was, of course, sold under the counter at establishments that sold “near beer” officially, and if you’re interested in the details of this aspect of the sale of alcohol, see next month’s Hill Rag, or the March 2011 issue. However, the large profit margin from selling liquor ensured that many others got into the habit, as well.

Richard Miller was a machinist at the Navy Yard, a Hill resident born and bred – and a cigar dealer. Around 1900, he opened a store at 527 8th Street Southeast, selling both cigars and periodicals. Over the next couple of years, as he bought a house to live in a few blocks north on 8th with his new bride, the former Elizabeth Lescoilet, Miller’s life seemed to be moving along well. In 1917, that would change, when his news stand raided for gambling. The back room, a well-known feature of cigar stores, and an excellent place for illicit activities, had housed a gambling den, and at midnight on May 13, ten men were arrested there by the local constabulary. Miller was released on $50 bond, and required to return the next day to answer charges of “permitting gaming.” The others were released as well, but told that they were to return as witnesses.

Miller managed to stay out of the news thereafter, even after the advent of Prohibition, dying at the age of 50 in 1921. He was interred at Congressional Cemetery. His newsstand/cigar store continued to operate, though, and continued to allow illicit activity in the back room. This came out in August, 1929, when the premises, now being operated by Eugene Brinkley (later to achieve fame as the namesake of Brinkley’s Bar) and George Andre, were raided by four policemen, who, in spite of being spotted by a sentry posted outside, managed to secure the premises, six men, and “2,000 quarts of whisky, two automobiles and a quantity of alleged gambling slips” as the Post reported the next day. Most of the contraband had been in the infamous back room, but some was stored in the garage immediately behind the premises, as well. 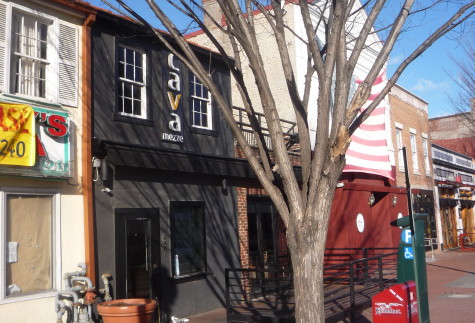 Miller’s cigar store is long gone, but Cava lives on in that space. (RSP)

Just across the street from Miller’s establishment, at 534 8th, a Louis Gritz ran what appeared to be a most respectable shop selling used clothing. On July 2, 1923, Gritz, who lived at 806 G Street SE, in a house that connected at the back with his store, found himself indicted on charges of offenses against the Prohibition law. It was not the first time that Gritz was thus charged, nor would it be the last: The very next year, he was charged again, and this time, his store was to be padlocked for repeatedly violating the law.

Gritz ended up staying in business until three years before his death in 1963, when he was eulogized as having been “for many years the outfitter to the Metropolitan Police Department.”

If you want to savor an alcoholic drink today at the site of Miller’s store, there is no need to break the law: Just head to Cava, and ask to sit in the back of their restaurant. Those working at the Community Credit Union Service across the street would, presumably, not be quite as amenable to your attempting to relive the past.